Global banking is at a crossroads – a kind of situation where a prudent investor would think twice before investing in banks owing to the stress in the asset quality down the line. On the other hand, banking stocks promise a great future owing to strong growth, rising long-term yields, shorter-term yields near zero, and above-expectation earnings.

Bank stocks have steadily raced this year, despite the fact that the tech sector has hogged all the limelight. Morgan Stanley Capital International’s (MSCI) World Bank index is testimony to this. The index has given a gross return of 25.47% in the first six months of 2021 – almost double than 13.33% return offered by the MSCI World Index.

Despite this rally, the valuations are saner and more real in the banking sector. As on 30 June 2021, the MSCI World Bank Index had a price-to-earning multiple of 14.88 – that means an investor is investing 14.88 pennies to earn every penny in global banking stocks. This is almost half of the cross-sector global figure, where an investor is paying 27.38 pennies to earn one penny. In simpler terms, this would mean that bank stocks, in itself, are only half costly as all other stocks combined.

To add to it, at 2.51%, the dividend yield of the global banking sector is 86 basis points more than that of all sectors combined.

However, on the other hand, billionaire investor Warren Buffett, whose advice world looks up to, has been trimming his stake in the banking sector – thinking that he has been overweight on banks compared to the huge amount of risk he is taking. "I like banks generally, I just didn't like the proportion we had compared to the possible risk if we got the bad results that so far we haven't gotten," he had said, justifying his sell-off.

One way to ascertain the real picture is to look at the fundamentals in the sector. The overall global banking industry is vast, to give any realistic number. So, to get the trend, we have zeroed in on top 20 banks of the world. Of these top 20, nine are from China, five from the US, two from Japan and France each, and one each from the UK and Spain. 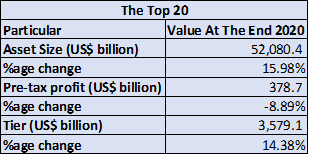 As the numbers show, the banks are neither in bad shape, nor in too good shape – the rally in banks could probably have been avoided.