Are meme stocks talk of the town?

Meme stocks are equities that have recently experienced a boom in viral activity, which is typically fueled by online social media sites like Reddit and Twitter. Retail investors in social media discussion groups have come together to look for equities with significant short interest levels.

Meme stocks earned their title from the surge in trading activity that resulted from social media interest and marketing. 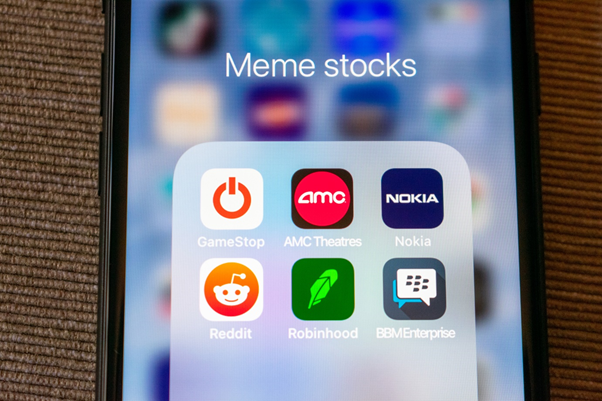 Retail investors are driving the surge in meme stocks, which is fueled by a social media craze. Online forums debating the upcoming big stock have come to power, reaping life-changing profits for these odd winners.

How do these stocks work?

As per a member on the WallStreetBets site, the following phases describe how meme stocks function in the stock market.

The rally of meme stocks

AMC Entertainment, a US-based cinema operator and GameStop, an American video game retailer, two formerly troubled equities, have recently been in the headlines as they became twice their value in no time.

Gamestop’s share price has rallied over 1100% year to date as of June 11, 2021. While AMC’s share price observed over 500% rise in its stock price in the month of May 2021, Blackberry (enterprise and security software services provider) shares soared by more than 50% in the same month.

DO READ: GameStop (NYSE:GME) Zooms By 47% as Meme Stocks Rally

The unexpected rallies in meme stocks may provide investors with rich profits in a matter of seconds. However, the tremendous volatility that comes with them may easily catch traders off guard, putting them in a tough situation when shares plummet.

GameStop's stock dropped over 27% on June 10 after it caught the eye of the Securities and Exchange Commission, which has demanded papers from GameStop and others to investigate what caused the unusual short squeeze in specific companies that began in January and continued into June. Blackberry and MicroVision also saw a fall in interest in the last week as compared to the week before.

However, certain meme stocks and their social media mentions, had regained their dominance by June 11.

Though meme stocks have recently gained a lot of interest, taking a more diversified approach and long-term strategy can help investors more.