Could Coinscope be the next coin to go parabolic?

There is an increasing trend in the cryptocurrency space for coins to fly off the charts with 1,000-plus per cent increases in the span of 24 hours. Sadly, most of these coins are manipulated either through dodgy developers, whales causing pump and dumps or the coins being outright rug pulls.

There aren’t many coins that have the potential to go completely nuts in a short span of time in a legitimate fashion, but Coinscope could be the next.

Let’s learn a little more about it.

Coinscope is one of the more intriguing tokens to come to the market recently. It is the native token of the Coinscope platform, which is a combination of Tokensniffer and Certik with a little bit of Coinmarketcap thrown in the mix.

Coinscope provides information about various crypto projects to help investors make informed decisions and avoid being scammed. It conducts audits to assess the quality of the project’s website, white paper, contract, security, its roadmap, social media footprint and whether the developers are identified and what their credentials entail.

Also read: How to find crypto gems before they moon!

Coinscope then provides a generic score assessing that project – and community members can also vote on the information provided to verify its accuracy. 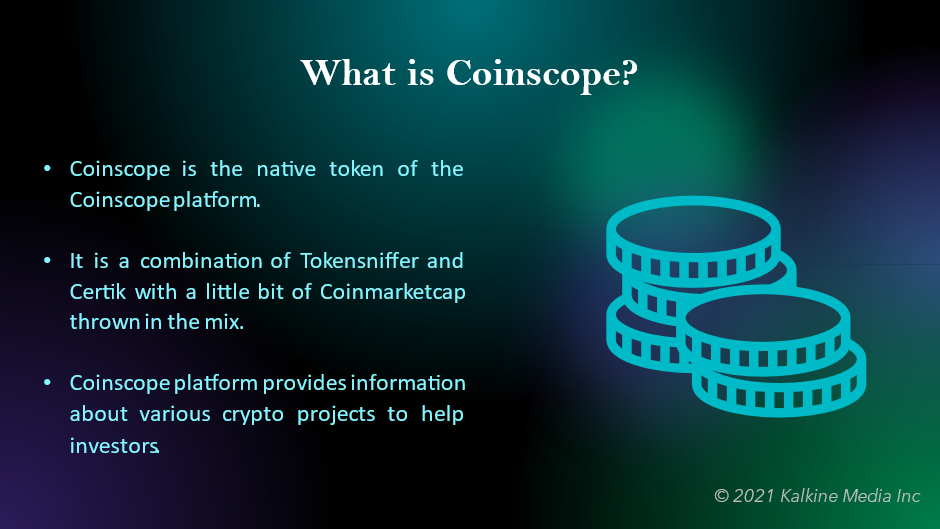 It also contains trading charts, hosts a collection of NFTs, and provides a list of initial coin offerings (ICO) and analyses them before they launch on decentralised exchanges.

The platform has been operating since late May 2021 and the token has only recently been released in November.

Also read: What is Vulcan Forged & where to buy PYR crypto?

If you are looking to get on board, you can purchase the Coinscope token on Pancakeswap with Wrapped BNB (WBNB) token.

In terms of the price prediction, Coinscope is likely to see another pump shortly. It has launched during a market wide downturn and still performed admirably.

As more people become aware of this crypto platform and utilise its service, the attached token is likely to inherently increase in value. It is a project with reasonably deep liquidity, a market cap of about US$ 5 million, and with a relatively low maximum token supply of 100 million.

Significant things can happen for Coinscope moving forward, considering its present momentum. Some market experts believe that it could by the end of the year push past a value of 10 cents and cross the US$ 1-mark by next year-end. However, one should always keep in mind that the cryptocurrency space, at the end of the day, is a substantially volatile one.