What is a mid-cap?

Shares in public corporations with market caps of $2 billion to $10 billion are classified as mid-cap stocks. Mid-cap companies and stocks fall between the small-cap and the large-cap categories. These stocks are said to offer a good mix of stability and prosperity.

What are the differences between large-cap, mid-cap, and small-cap stocks?

Investors consider a mid-cap business as profitable because mid-caps are projected to grow in revenue, market share, and productivity, as it is in the middle of its development curve.

Mid-caps are considered less volatile than small-caps, but riskier than large-caps, and have a moderate to heavy market presence.

As compared to small-cap companies, mid-cap companies react to market fluctuations with less vigour. However, as opposed to large-cap stocks, they have less flexibility in a bearish market.

Large-cap stocks belong to large, well-established firms with stable business models and are typically regarded as a safe investment. Large-cap companies have a stronghold on the market and are very secure. They maintain a firm grip on themselves during economic downturns or some other negative occurrence.

Furthermore, large-cap stocks would have typically been performing for decades, earning a solid reputation. They are a safe way to invest while reducing risk. In contrast to mid-cap and small-cap stocks, these stocks have lower volatility and are less vulnerable, which means that their prices remain relatively stable even through turmoil.

Large-cap stocks have lower growth prospects than mid- cap and small-cap stocks, making them a safer investment for those with a longer time horizon. Since there is a strong demand for large-cap stocks in the stock market, they seem to have more liquidity.

Mid-cap companies are in the growth phase growing and have the potential to grow into large-cap corporations in the future.

Since mid-cap companies are considered to be more volatile than large-cap companies, investing in them is quite riskier.

Mid-cap stocks are preferred by investors due to their higher rate of growth. Since demand for mid-cap companies' stocks is marginally lower, their liquidity is fairly low in comparison to large- caps.

Small-cap firms are smaller than large-cap companies and have significant growth potential. These stocks are volatile because they have a lower chance of succeeding over time. As a result, such companies' stocks are wildly unstable and put investors at risk.

Small-cap firms have a track record of underperformance, but when an economy recovers from a downturn, small-cap stocks frequently outperform large-cap stocks.

Small-cap stocks with a high-risk tolerance have the best growth potential. The liquidity of small-cap firms is the lowest. 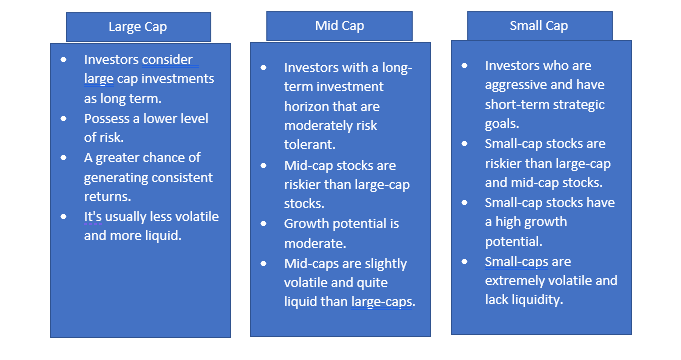 When is the best time to invest in mid-cap?

Mid-cap companies thrive during the business cycle's growth period when interest rates are still low. During the recovery of the economy, mid-caps outperform large caps.

What are the benefits of mid-cap stocks?

Mid-cap companies have a balance of growth and stability, and they are less volatile than small-cap stocks and have fewer chances of going bankrupt during a recession. These stocks have a fair chance of rising in value and payout big dividends to investors.

They also have higher earnings than small and large-cap companies. Managers of mid-cap companies may obtain low-cost loans to meet the growing market. They expand through capital equipment purchases, mergers, and acquisitions.

Since mid-caps have been around longer than smaller companies, investors will learn more about them. They are more reliable and have a long record of success.

Many mid-cap firms have more seasoned management teams and are financially more competitive than their small-cap peers. Some mid-cap companies may become as stable as larger-cap companies as they mature.

What are the threats of investing in mid-cap stocks?

A value trap occurs when a business operates in low income with insufficient cash flow for an extended period. Value traps are common in mid-cap companies, especially those with low rankings.

The management and organisational infrastructure of mid-cap firms are less effective than that of large-cap companies. They are typically less well-equipped than large-cap firms. 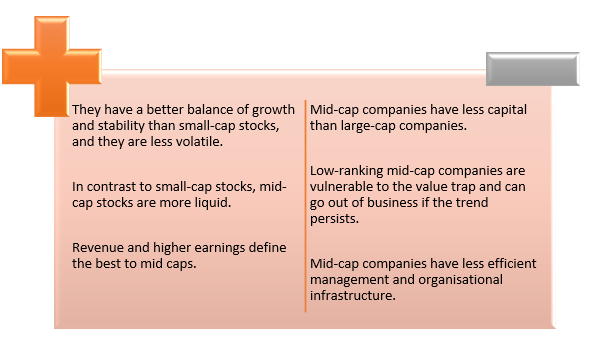