An asset bubble is a situation when the prices of assets escalate rapidly over a short span of time. The asset prices are at a level or range that is much above the asset's intrinsic value. The price expansion is a result of skyrocketing demand for the asset. The price bid up is way beyond sustainable values. This uptrend is followed by a price contraction and general crash in the asset's market value- this phenomenon is also called bubble burst or bubble pop. The falling prices are to the extent that the economy on the whole experiences headwinds. There is a decline in investment and spending in the economy. Bubbles may be created in the case of assets like real estate, gold, cryptocurrencies etc. 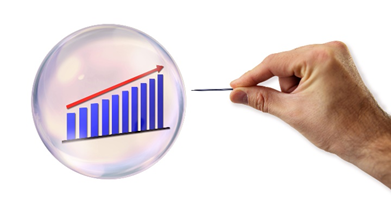 How does a bubble originate in a market?

The origination of an asset bubble can be in various ways. One of the most commonly seen triggers is a decline in interest rates- this leads to increased borrowing, encourages higher consumption expenditure, promotes more private investment and foreign investment influx and contributes to growth in the economy. Similarly, a new product or technology too can lead to a demand surge leading to price rise. For example, the dot com bubble was a phase where investors perceived anything accompanied by the term ".com" to be highly valuable.

In a crux, when there is a drastic change in investor expectation concerning an asset, they plunge into the market along with other speculators with hope of high profits. Herd mentality, short term goals, cognitive dissonance take precedence over fundamental valuations. The fear of missing out drags in more and more prospective investors- demand begins to exceed supply. This drives up the prices massively and ultimately builds up the bubble over time. The speculative fever triggered by any means has the potential to convert into a bubble.

What are the stages in which a bubble pattern emerges in an economy?

The five steps of a bubble are often attributed to the economist Hyman P. Minsky and are described as follows-

It is the first stage wherein investors are attracted towards an investment avenue due to a significant unusual happening like a new technology or historically below average interest rates. Such events shape people's expectations about the asset, and they decide to invest in it.

Initially, the price rise is nominal but as more and more people get to know of this, there is media hype on the matter- the fear of missing out or the FOMO factor strikes prospective investors. So the speculation around the assets builds up further and further and pulls in more investors.

The period of boom is followed by the peak in the price of the asset. At the peak, irrational exuberance alone that can explain the rise in prices of the concerned asset. The greater fool theory is at work here- without any consideration for the quality of the asset and its actual intrinsic value, there are people ready to park their money into something that is so highly overvalued. In the late nineties, the dot com bubble saw US technology stock value peaking and the Nasdaq index grew fivefold between 1995 and early 2000s.

Finally, the price surge begins to appear unrealistic. The boom period is followed by people selling off the assets to reap the profits from the prices that are still on the higher side. This is where the burst becomes almost unavoidable, and alert investors try to profit by selling off the stocks. However, the timing of the bubble pop remains uncertain.

Like any other physical bubble, once pricked, there is no inflation- it is moved towards nothingness. So is the case of asset bubbles too. Some investors do see the prices fall based on the movers of the profit-taking stage, but they wait in the hope for prices to rise again. By now, the euphoria to buy has completely died out and what remains is the panic to sell off the asset. Supply exceeds demand- there is no scope for profits triggering panicked sales to avoid losses in the future. 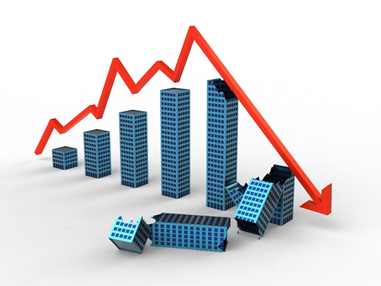 Some examples of bubbles witnessed in history

The first recorded bubble was in Holland in the early 1600s. The commodity in question was a flower- tulips! Tulip bulbs began to be bought as a luxury good, and gradually, things reached a phase where buyers exchanged the bulbs for houses and real estate. The rarer the variety, the higher was the price. What fuelled the speculation was a futures exchange created without actual delivery, and buying and selling were only via contracts. Gradually the bubble burst, and a lot of people experienced losses.

In 1989, the Japanese real estate bubble was at its peak. Land value in Tokyo exceeded over one lakh dollars per square foot, and after the bubble burst, the properties lost 80% of their value, and stock markets saw a crash of 70%.

Similar was the dot com bubble case, which had built up towards the end of the 1990s and peaked in the early 2000s. The total value of the technology stocks exceeded the national GDP of several countries before the bubble burst, and the market index declined massively.

The US housing bubble followed the dot com bubble. With the stock market crashes caused by the popping of the dot com bubble, the value of real estate began to soar, and so did the demand for housing in the country. This was accompanied by leniency in lending on the part of banks. As a result, more and more people took housing loans with low-interest rates. Later, when the stock market recovered, the cost of borrowing skyrocketed beyond affordability. Borrowers triggered a sell-off trend, and prevalent was a scenario of default in the mortgage.

5 Canadian sectors that outshone in 2021

Can these NZX travel stocks be explored amid delayed border reopening?

How long does a bull and a bear market lasts? Characteristics of Bear/Bull markets

What is a bear & a bull market?

Why Christmas won’t be the same this year?

Where do we see NZ interest rates going from here?

Meet Australia's technology multi-millionaires under the age of 40