This year has not been good to equities, generally speaking. Semiconductor stocks have not been that different.

However, make no mistake, all the factors that made semiconductor stocks worth their weight in gold before this bearish phase hit, still likely hold true today.

From the perceivable future of the automotive industry, i.e., electric vehicles, to cloud computing, digitizing economies and 5G, semiconductors will be required.

So, let’s look at some Canadian semiconductor stocks.

It has lost 18 per cent in a year and 20 per cent in 2022. In the last three months, it has sunk 28 per cent and looks to be only two to 2.5 per cent away from being in undervalued territory.

SEV closed out Thursday at C$1.08 after having gained about six per cent though the sector lost nearly six per cent in the trade session. This may have just taken it slightly above undervalued territory.

Still, it has lost nearly seven per cent in a week and about 55 per cent this year. Spectra7 is a C$36 million market cap company.

QNC ended Thursday’s trade at C$0.225, up 2.3 per cent. Its performance this year has been better than the above two stocks.

Much of that fall came over the last week as it lost over 26 per cent in five days. Its arguably on the brink of being undervalued now.

VNP fell nearly seven per cent Thursday to close at C$1.12. The stock has lost over 53 per cent in 30 days and looks like it is well into undervalued territory.

VNP’s price-to-earnings (P/E) ratio, effectively the amount of dollars to be invested to net one dollar of gain, stands at 24.2.

With a market cap of about C$1.4 billion, Celestica is easily the biggest company on this list and generally, the bigger the company, the less volatile the stock.

It has risen 34 per cent in a year and is in the red seven per cent YTD. Its one-week loss is under five per cent and it has seen the least weekly loss among these companies.

CLS has the best P/E ratio on this list and that stands at 11.5. 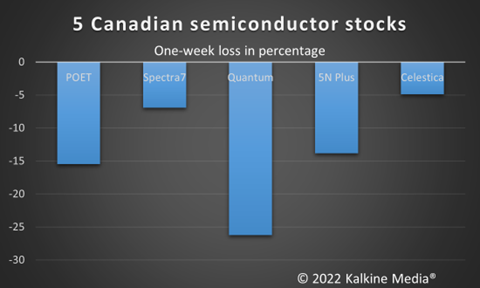 The TSX Composite Index is down 11.32 per cent from its all-time high of 22,213.07 points and this indicates it has had a correction. These semiconductor stocks have plunged in the last week.

However, all that held true before this bearish phase about semiconductor stocks, still likely holds true now. But some of their valuation metrics are far from impressive and deep research is needed before any investment.