Smallcap investors could explore under C$-5 stocks like Itafos (TSXV: IFOS),  Pine Cliff (TSX: PNE), Global Atomic (TSX: GLO) etc., as they appear to have growth prospects in future. However, they must only indulge after assessing the risk factor involved in investing in equities.

Market environment has been extremely sensitive to economic factors like the Ukraine crisis, supply chain challenges, inflation and rate hikes. However, investors with high-risk abilities may try to advantage of such market situations by targeting smallcap stocks.

On that note, let us explore five Canadian smallcap stocks and discuss their financial and stock performance in detail.

Fertilizer company Itafos said its revenue climbed to US$ 149.9 million in the first three months of Q1 2022, up from US$ 90.1 million a year earlier. The junior agriculture company improved its profitability by posting increased net earnings of US$ 33 million in the latest quarter relative to US$ 1.9 million in Q1 2021.

Itafos also revised the low end of its 2022 net earnings guidance range from US$ 65 million to US$ 80 million. It expects its net profit to reach somewhere between US$ 85 million and US$ 95 million in FY2022.

IFOS stock gained nearly 41 per cent in nine months. According to Refinitiv data, this fertilizer stock had a Relative Strength Index (RSI) of 44.32 on July 20, which signals a moderate trend.

ESI stock soared by roughly 82 per cent year-to-date (YTD). As per Refinitiv, ESI stock recorded an RSI of 43.35 on July 20, representing a moderate level. 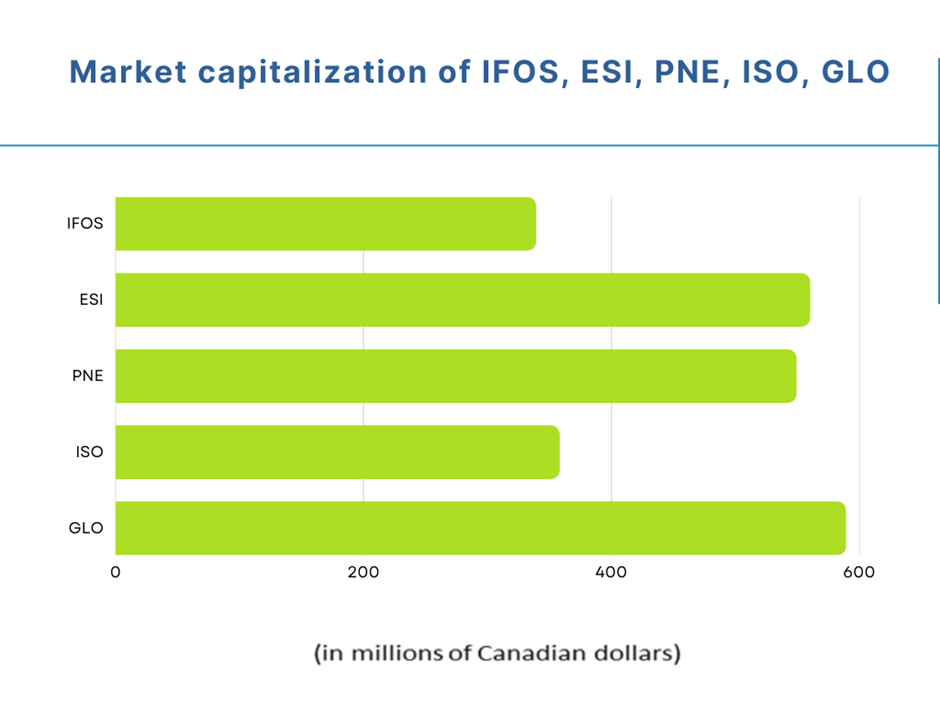 PNE stock rocketed by nearly 327 per cent in 52 weeks, and Refinitiv findings suggest that it had an RSI of 51.78 on July 20, higher than the oversold mark of 30.

As countries are looking for alternative energy sources like Uranium, it is likely that junior uranium producers like IsoEnergy could notably grow in size. IsoEnergy had a debt-to-equity (D/E) ratio of 0.67, which could mean low financial risk.

ISO stock zoomed by about 61 per cent in 12 months. According to Refinitiv, ISO stock seems to be on a mixed trend since mid-May and held an RSI of 55.95 on July 20.

Global Atomic is a metal miner focused on exploring and developing uranium assets in Niger.

GLO stock jumped by almost 33 per cent in 12 months and, according to Refinitiv, held an RSI of 62.25 on July 20, depicting a moderate-to-high trend in the market.

Risk takers in the stock market could explore these under C$-5 Canadian smallcap stocks for substantial gains as small market capitalization could mean high growth. However, such companies could also face financial difficulties and result in losses instead of gains. Hence, one should properly assess the risk-reward associated with such stocks.