Stocks of Turquoise Hill Resources (TSX: TRQ) has been shooting higher, up by over 32 per cent at 11:11AM EST, after the company received a buy offer on Monday, March 14.

Rio Tinto International Holdings, which already has a 51 per cent ownership interest in Turquoise Hill Resources, outlined a proposal to buy the remaining 49 per cent interest from the company’s minority shareholders.

According to the offer, Rio Tinto would pay C$ 34 per common share (up from C$ 25.68, its closing price on Friday, March 11) in cash for a total of about 99 million Turquoise shares.

The Montreal-based mining company reported a revenue of C$ 503.9 million in the fourth quarter of fiscal 2021, up 24.4 per cent year-over-year (YoY). The company said that this revenue growth was mainly due to a 35.8 per cent increase in copper prices and 54.5 per cent growth in gold sales.

However, the metal miner posted a net income of C$ 207.3 million in the latest quarter, down from C$ 241.6 million in 2020, primarily due to high tax payments and rising costs. 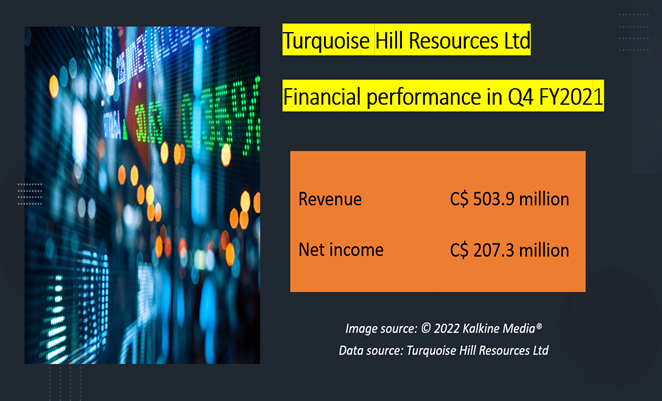 The mining scrip zoomed by nearly 77 per cent in the last six months.

Investors should note that this buy offer from Rio Tinto is conditional on certain things, including any type of additional equity funding etc., which is a crucial factor to consider. Hence, one should go through such key details before delving into any investment decisions.