Is this the best Canadian Oil & Gas stock to buy right now?

Stocks of Tourmaline Oil Corp. (TSX:TOU) jumped 4.5 per cent at market open on September 23 and were trading at US$ 42.94 per share, at the time of writing. The surge in the stock prices could be due to the company's announcement of a special cash dividend and a guidance update for 2022.

Investors have been bullish about the Oil & Gas company's stock since the beginning of this year and Tourmaline has delivered stellar returns to the shareholders. TOU stock has catapulted by 139.5 per cent year-to-date (YTD) and it had recently clocked a 52-week high of C$ 43.1 per share on September 16.

If the stock continues soaring, it could breach the 52-week high on Thursday, September 23, as it is already near the US$ 43-mark and might cross it by market close. That said, let's take a closer look at the company's guidance and recent developments:

Is Tourmaline (TSX:TOU) worth investing in?

On September 22, Tourmaline announced that its approved 2022 EP capital budget is C$ 1.125 billion and that it is expected to deliver an average production in the range of 500,000 to 510,000 barrels of oil equivalent per day (boepd) and generate a cash flow of C$ 3.7 billion.

Notably, the Oil & Gas company has plans to return a majority of its free cash flow to shareholders on a go-forward basis. The company is in a position to increase its base quarterly dividend by C$ 0.01 per unit to C$ 0.18 per share payable to shareholders on December 31. This represents an annualized payout of C$ 0.72 per share and Tourmaline has also declared a special dividend of C$ 0.75 per share payable on October 7. 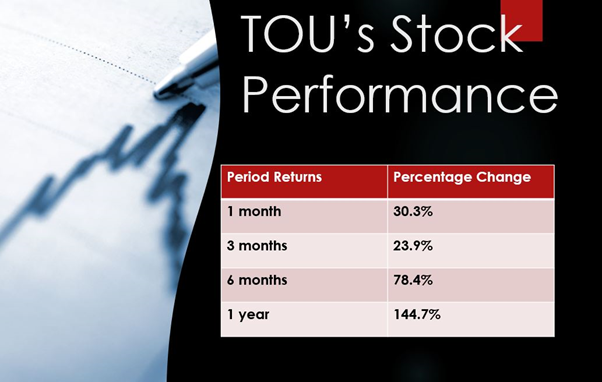 In Q2 2021, the revenue from commodity sales and realized gains were C$ 921.3 million, representing an increase of 108 per cent YoY.