Husky Energy Inc (TSX: HSE) and Cenovus Energy Inc (TSX: CVE) merger transaction completed on January 4, 2021, the companies announced in separate statements. The deal was concluded through a final arrangement that was jointly announced on October 25, 2020, under which both energy companies decided to merge in an all-stock transaction.

The energy stock has yielded nearly 107 per cent returns in the last three months, guided by the merger development. However, the stock has declined by almost 37 per cent year-to-date (YTD). Its current market cap is approximately C$ 6.33 billion. It ranks among TMX’s top energy companies that have outperformed their peers with the highest price gains in the last 30 days. 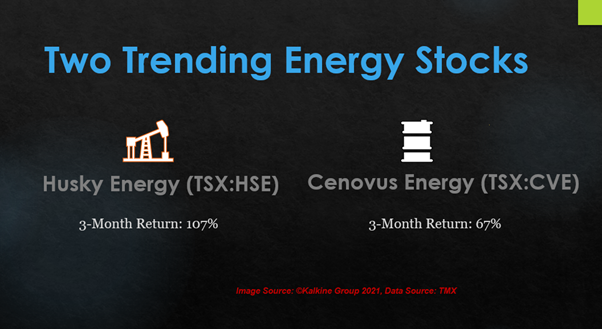 Alberta-based energy company’s stocks have soared by almost 61 per cent in the last three months. Although, the unit has decreased by over 40 per cent YTD. The integrated oil company also made it to TMX’s top energy companies.

Cenovus has a current market capitalization of C$ 9.5 billion.

Its 10-day average stock trading volume is 6.45 million units, while its 30-day average volume is 6.6 million. The oil and gas producer is also placed among TMX’s Top Volume performers. The company has around 1.228 billion outstanding shares listed on the TSX.