A series of unfortunate events seems to have turned out to be rather fortuitous for the Canadian oil and gas sector. Under five months into the year and the S&P/TSX Capped Energy Index is up 56 per cent for 2022.

Oil demand was already high to begin with due to production stoppages during the pandemic, but Russia’s invasion of Ukraine, the OPEC not being able to step up production and the European Union looking to end energy dependence on Russia, only sent demand soaring.

On Tuesday, May 17, Alberta Premier Jason Kenney in testimony to a US senate committee said Canada can increase output by 900,000 barrels a day.

While that does seem like a daunting number, let’s look at five TSX oil and gas stocks that make for an interesting watch in lieu of this.

It would have been hard to leave Enbridge out of this list especially after Mr Kenny named the company by urging senators to safeguard the company’s Line 5 pipeline that Michigan is currently trying to shut down.

ENB’s price-to-earnings (P/E) ratio is 19.9, indicating the amount of dollars required for investment for each dollar’s gain.

With a dividend yield of about six per cent, the stock is a dividend aristocrat.

Mr Kenny also voiced disapproval of the Biden administration revoking an important permit for the Keystone XL pipeline. Ovintiv says its approach is to respect communities it is involved with and to respect the rights of all.

While OVV is down eight per cent over the last month, its YTD return is still 42 per cent. What’s more, is that is up six per cent in five days.

The stock has a P/E ratio of 13.5 and its dividend yield is over two per cent.

SU has been a top performer this year, both by price and by volume, and remains an interesting watch. It closed Tuesday at C$49.12, after an intraday 52-week high of C$49.83.

That is over 55 per cent better than it started this year. Up 110 per cent over nine months it has been scaling to new heights for that period.

The company’s proved and provable reserves is about 5.2 billion barrels of oil equivalent and that will certainly come in handy to boost exports.

Cenovus has refining operations in the US. CVE has zoomed 175 per cent in nine months. 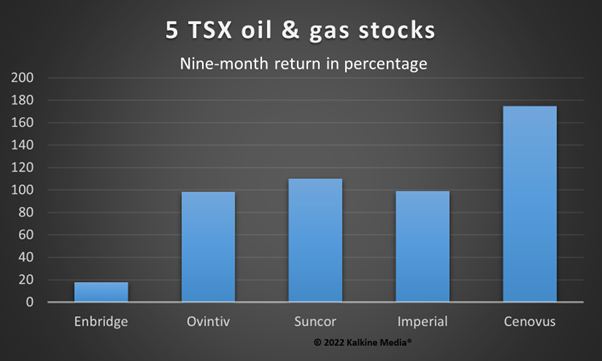 If Canada are to boost oil exports and fill the void left by Russian oil, these stocks likely make for an interesting watch. The increase in oil output will not be overnight. It would likely involve increasing the pace of the projects that are planned. These are dividend-paying stocks.