At the UN climate conference COP26, Canadian Prime Minister Justin Trudeau committed to put a cap on the greenhouse gas (GHG) emissions released by the country’s oil and gas industry.

While the Liberal government has shown interest in achieving the net zero target by 2050, some big players in the oil and gas space believe that the climate targets are “unrealistic” and set to cause harm to their business.

But amid the fear of a carbon emission cap and supply crunch, the energy sector has been performing comparatively well recently. At market close last Friday, November 5, the S&P/TSX Capped Energy Index was up by 2.59 per cent, marking a year-to-date (YTD) surge of 83.9 per cent.

On that note, let us discuss some of the top TSX-listed oil and gas companies and their stock performances.

The C$ 48.2-billion market cap company marked a one-year high stock price of C$ 33.34 on the first day of November, which was about a per cent higher from its last closing price.

SU stock has jumped up by more than 14 per cent over the past month and surged by roughly 37 per cent in the previous three months. Its year-to-date (YTD) return has been more 54 per cent.

The energy stock has also yielded almost 117 per cent return in the previous twelve months.

Canadian oil and natural gas firm Canadian Natural Resources Limited saw its stocks close at C$ 54.21 apiece on November 5, up by 3.041 per cent. During this trading session, the energy stock clocked a 52-week high of C$ 54.85.

Its stock also soared by almost 154 per cent over the previous year, while posting a YTD return of more than 77 per cent.

The firm is expected to dole out a quarterly dividend of C$ 0.588 per share on January 5. 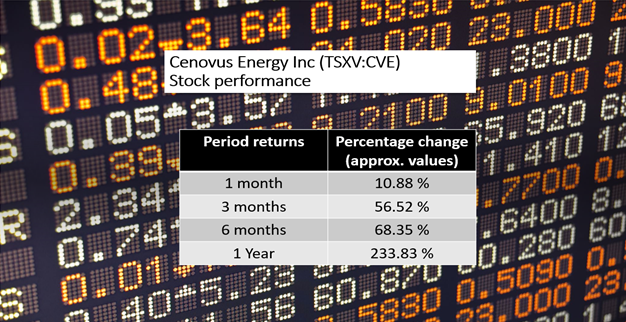 Over the past month, its stock price has spiked by nearly 11 per cent. It also gained more than 68 per cent in the previous six months.

CVE stock has surged by nearly 234 per cent in a year and rocketed by more than 101 per cent on a YTD basis.

In the third quarter of FY 2021, its cash from operating activities stood at C$ 2.1 billion and adjusted funds flow was C$ 2.3 billion, supported by a daily upstream production of almost 805,000 barrels of oil equivalent.

On November 2, the company declared an increased third-quarter dividend of C$ 0.035 apiece, which will be payable on December 31.

Tourmaline Oil Corp, a Canadian crude oil and natural gas producer, witnessed its scrip close at C$ 46.22 per share on November 5, up by 1.784 per cent.

Tourmaline’s scrip also zoomed by about 143 per cent in a year, while its YTD gain was about 174  per cent.

On November 5, Whitecap Resources stocks packed up its trading session at C$ 7.4 apiece, up by 1.509 per cent.

Many oil and gas companies are working on minimizing their carbon footprint to keep up with the changing times.

Investors should ideally take note of these environment-conscious initiatives while researching an oil company’s financial and fundamentals details.