Most oil and gas industries suffered quite a setback this year in the wake of the coronavirus pandemic and the fluctuating oil prices and demand. The renewable energy sector, on the other hand, escaped the crisis times pretty much unscathed.

The S&P Global Clean Energy Index climbed over 100 per cent this year and nearly 28 per cent quarter-to-date.

The Justin Trudeau government has been promoting eco-friendly clean energy and tech alternatives since it took office in 2015. Most recently, the government announced a number of new climate change-oriented measures, including a nationwide carbon tax which did not sit well with fossil fuel-dependent provinces. 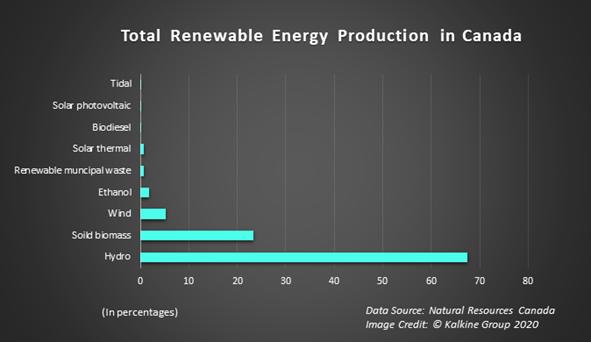 Stocks of Northland Power Inc, currently trending on the TSX, are up over 62 per cent this year. Since plunging amid the COVID-triggered March lows, its scrips have rebound by about 54 per cent in the last nine months.

The stocks surged by almost 100 per cent in the last six months and about 237 per cent this year.

Apart from renewable natural gas (RNG), Xebec Adsorption also deals in the production of hydrogen, which slowly gathering steam as an energy source provider in Canada.

The Guelph-based energy company posted a 31 per cent sequential growth in its revenue of US$ 914 million in the third quarter ending 30 September 2020.

Algonquin Power & Utilities, which operates various renewable energy facilities, recorded a YTD climb of nearly 11 per cent in its stock price. The stocks climbed about 12 per cent in the last six months.

The Ontario-based power company distributed a quarterly dividend of US$ 0.155, which currently posts dividend yield of 4.003 per cent, as per the TMX data. Its three-year dividend growth stands at 7.86 per cent.

Algonquin Power & Utilities posted a year-over-year growth of three per cent in its revenue of US$ 376.1 million in the third quarter ending 30 September.

Canada-based electric utility company TransAlta Renewables Inc recorded a nearly 18 per cent YTD growth in its stock price. Since taking a steep tumble amid the March market crash, the stocks rebounded by over 30 per cent in the last nine months.

The Calgary-based company pays a dividend of C$ 0.078 on a monthly basis. It currently records a dividend yield of 5.153 per cent, as per the data posted on the TMX Group.