The Canadian Real Estate Association (CREA) released fresh data on Monday, November 15, which  showed that the country’s home sales surged by 8.6 per cent in October from the previous month.

On the other hand, Canada Mortgage and Housing Corp (CMHC) has noted that seasonal annual housing starts in the country dropped from 249,922 in September to 236,554 in October.

Morguard Corporation is a Mississauga, Ontario-headquartered real estate firm that holds a residential, industrial and commercial properties  in Canada and the United States.

Also read: Can Cineplex (TSX:CGX) be a phoenix stock?

The real estate stock jumped by more than four per cent in the last week and swelled by roughly seven per cent on a month-to-date (MTD) basis. It also soared by about 36 per cent in the past year.

The Canadian real estate firm is scheduled to pay a quarterly dividend of C$ 0.15 per share on December 31.

Altus Group Limited provides advisory, software and data solutions to the real estate businesses in North America and other parts of the world.

Altus Group’s stock clocked a one-year high of C$ 70.39 on November 12, 2021, after it announced the acquisition of data analysis software firm Scryer Inc for US$ 201.5 million.

The Toronto-headquartered company saw its stock close at C$ 67.87 apiece on November 16, up by about a per cent. It touched a day high of C$ 68.59 during the session. 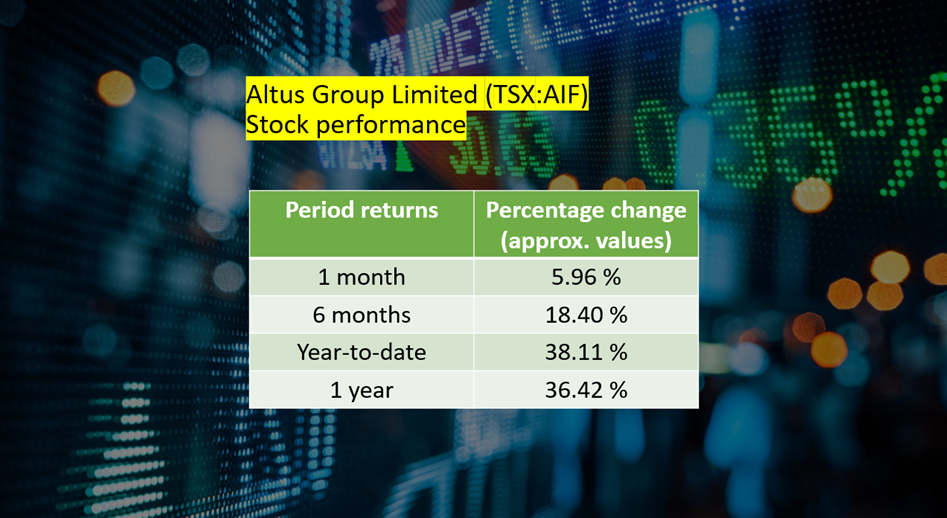 Also read: 3 Canadian healthcare stocks to keep on your radar

With the rise in home sales and tight supply, the Canadian real estate sector could again heat up.

Due to this, some investors believe that they could fetch notable returns while venturing in the real estate market. However, timely investment decisions should ideally follow a thorough market research.