Virgin Galactic Holdings Inc (NYSE:SPCE, SPCE:US) is creating quite a buzz on the stock markets, and it is not the kind of reaction you would want from investors.

The space tourism company’s stocks tanked by nearly 19 per cent on Thursday, January 13, noting a daily trade volume of over 70 million, following some corporate announcements.

Let us find out what could have caused this stock price dip.

Virgin Galactic, which currently has a market capitalization of US$ 2.5 billion, is a United States-headquartered aerospace and space travel company working on human spaceflights and vehicles.

With vertically integrated operations, the company is leveraging its technologies to develop a spaceflight system to offer commercial space travel experiences to its customers.

The latest decline in its stock price came as Virgin Galactic announced on Thursday that it is looking to take on nearly half a billion dollars in debt.

The Californian company said that it is issuing convertible senior notes, which is a type of debt instrument, worth about US$ 425 million in a private offering.

Early buyers have also been extended the option to purchase notes of up to another US$ 75 million, which could possibly see the debt go up to US$ 500 million.

Also read: Saputo (TSX:SAP): What to know about the dairy stock before you buy it?

Virgin Galactic held a cash position of US$ 1 billion, including US$ 721 million of cash and cash equivalents and US$ 286 million of marketable securities, at the end of the third quarter of fiscal 2021.

The US company spent US$ 36 million in research and development in Q3 FY2021, down from C$ 46 million spent a year ago (according to the Generally Accepted Accounting Principles).

Virgin Galactica also incurred a net loss of US$ 48 million in the latest quarter, as compared to US$ 92 million in Q3 FY2020. 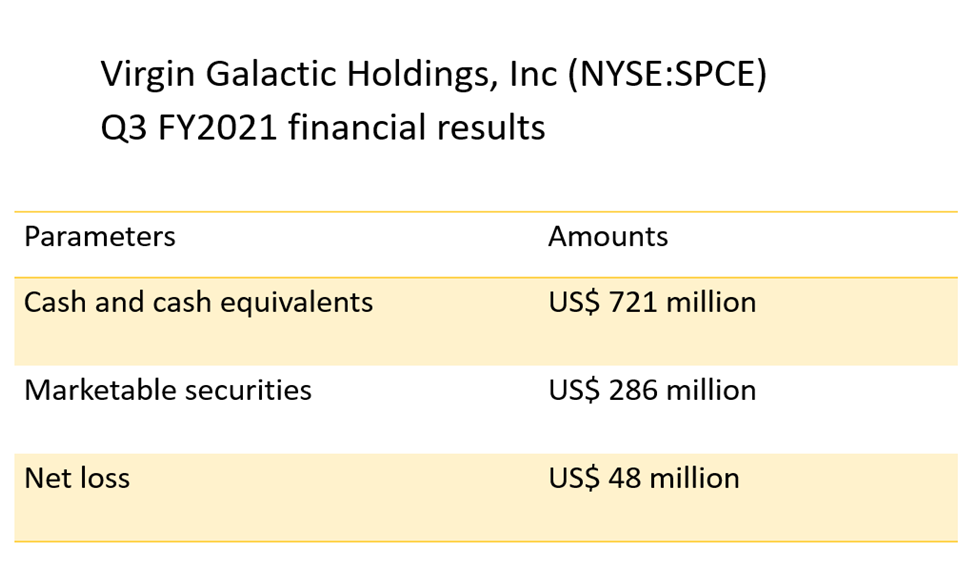 Virgin Galactica's stock shrunk by nearly 64 per cent in the past one year. The space stock declined by about 25 per cent year-to-date (YTD).

Virgin Galactic said that it intends to utilize the net proceeds from senior convertible notes offering to finance its working capital requirements and general and administrative expenses.

In addition, the company also plans to use it for capital expenditures to speed up the development of its spacecraft fleet.

Investors should look at the risk and reward factor before investing in space travel and tourism companies as these come with high cost factors and can face significant losses if their projects fail.