Stocks of Canadian construction and project management company, SNC-Lavalin Group Inc. (TSX: SNC), drew renewed interest from investors after it announced to the sale of its exploration business.

By market close on Tuesday, the stock soared by 11.057 per cent and over 3.7 million shares were traded.

SNC-Lavalin had been hit hard by the pandemic, mainly its oil and gas exploration business.

Its announcement to sell the energy segment triggered a buying-frenzy for the stock. Investors were enthused with the hope that giving away the risky business would boost the company’s bottom line.

The sale is part of a company strategy to give additional focus on its high-margin engineering and project management business, already one of the leading players in the market. SNC-Lavalin hopes to complete the deal with Kentech Corporate Holdings in the second quarter. 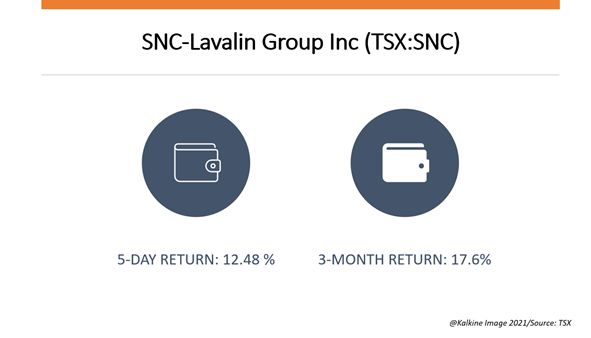 The company is also reviewing some of its ongoing rail projects to cut costs as the pandemic has aggravated the financial position. It is also reassessing all its legacy business in the light of the Covid-induced financial uncertainties, SNC said in a statement.

It will, though, reinforce its management and engineering services business, which are profitable and less risky, compared to its capital-intensive bigger projects.

In the last five days, the value of SNC stocks had risen by around 12 per cent. On Tuesday, they were priced at around C$25 a share. In the past three months, it rose by around 17 per cent.

It holds a dividend yield of around 0.3 per cent.

SNC-Lavalin Group has a market cap of $4.4 billion. It is virtually debt free with a debt-to-equity ratio of 0.82.

In its third-quarter report, ending September 30, 2020, the company had reported a net loss of $85 million, compared to a net income of $2.7 billion a year ago.

However, with the sale of its energy wing, we can expect the group to streamline its operations and focus more on EBITDA, which could reflect in the next couple of quarters.

The company also has a financial business and consulting arm and serves clients ranging from infrastructure, nuclear, to engineering sectors in over 50 countries.

The company has more than 50,000 employs under its payroll.