Bombardier Inc. (TSX: BBD.B) announced the expansion of its interiors refurbishment and repair activities at its service center located in Dallas, Texas, on Thursday, September 23.

The Canadian business jet manufacturer has partnered with Global Engineering and Technology Inc. (GETI), a leading company in aircraft furnishings, to offer more maintenance and support capabilities to the customers.

Bombardier says that the customers at Dallas Service Centre will have access to different services, including cabinetry, aircraft flooring, upholstery, and seats on various aircraft platforms.

Let’s take a closer look at Bombardier’s latest stock performance and financials to gauge why the stock may be trending.

Bombardier Inc. stock has rallied over 466 per cent in the past year. The stocks were up by seven per cent and closed at a value of C$ 2.04 on Thursday, September 23.

However, with a price-to-earnings (P/E) ratio of 0.80, the industrial stock price is low relative to its earnings.

The Canadian business jet manufacturer posted a net income of US$ 139 million in the second quarter of fiscal 2021, down by seven per cent year-over-year (YoY). 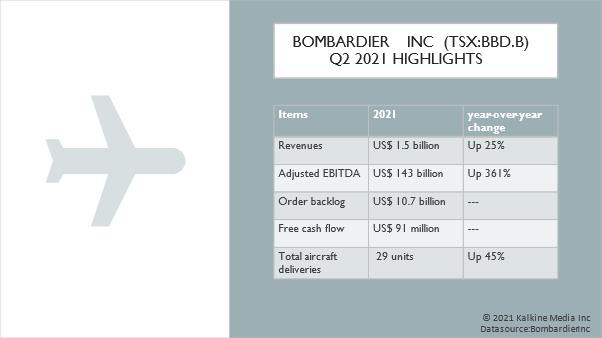 The Montreal-based firm’s total assets decreased by US$9.2 billion in the six-month period ended June 30, including its 5.5 billion euros worth deal with France-based Alstom in January.

Bombardier Inc was reeling under heavy debt over the past two years, which saw the disposal/auction of some of its key assets and its formal exit from the commercial aviation sector in 2020.

It sold the CRJ regional jet program to Mitsubishi Heavy Industries in a deal worth US$ 550 million in June 2020.

However, Bombardier posted a decline in its long-term debt worth US$2.7 billion since December 2020.

After years of debt and financial losses, the Montreal-based firm pushed for cost-cutting measures, improved cash flows, and focused on becoming a “pure-play business aviation company.”

On September 14, it launched the updated version of the Challenger 3500 Aircraft, which includes redesigned interiors and innovative technological features such as voice-controlled cabins to manage temperature, light and entertainment systems, etc.

Also read: Watch out for these 5 top performing cryptocurrencies

Earlier this month, it also delivered its fifth Global 6000 business jet to Saab, a Swedish defense supplier, for conversion into GlobalEye surveillance aircraft.

The aviation industry is gradually returning to normalcy as governments are opening the borders, particularly Canada and the United States. With a nearly 151 per cent uptick in the stock in the past six months, Bombardier stocks could be a turnaround stock.