Industrial stocks with robust business operations like Bombardier (TSX: BBD.B), Canadian Pacific (TSX:CP), Russel Metals (TSX: RUS) etc., might help Canadian investors with returns in the long run. The S&P/ TSX Capped Industrials Index jumped by 14.67 per cent on a quarter-to-date basis, thereby outperforming the TSX benchmark index, which only gained by 7.47 per cent during this time.

Bombardier now expects its free cash flow (FCF) to exceed US$ 515 million (higher than the previous projection of crossing US$ 50 million) in fiscal 2022, underpinned by working capital performance and improved interest cost savings from deleveraging, as claimed by the company.

The Montreal-headquartered plane manufacturer reported a revenue of US$ 1.55 billion in the second quarter ended on June 30, 2022, comparatively higher than US$ 1.52 billion in the same period last year. Bombardier said that the latest quarter's revenue represents 28 aircraft deliveries and double-digit growth in aftermarket revenue to US$ 359 million in Q2 2022, up by 22 per cent year-over-year (YoY).

The mid-cap stock zoomed by nearly 77 per cent in one month. According to Refinitiv findings, the BBD.B stock possessed a Relative Strength Index (RSI) of 77.44 on August 16, which usually depicts a high momentum or bullish trend in the market.

ATS Automation saw its stock zoom by over 30 per cent quarter-to-date (QTD). Refinitiv data suggests ATA stock could be in overbought territory with an RSI value of 78.44 on August 16. 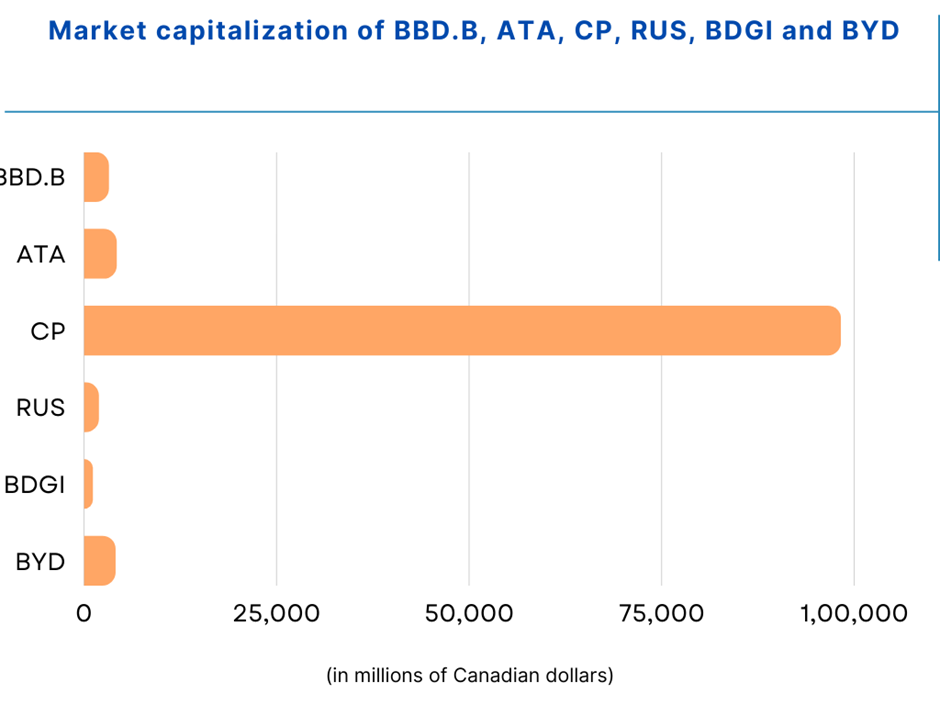 Canadian Pacific, on August 16, announced receiving regulatory clearance for its merger with Kansas City Southern (KCS) from the Committee on Foreign Investment in the United States (CFIUS). The railway giant also revealed that the US Surface Transportation Board (STB) reviewal of this merger is projected to be complete in early 2023.

In the wake of this update, it is likely that the CP stock spiked by over three per cent to close at C$ 105.59 on August 16, with about 1.25 million shares switching hands. Canadian Pacific stock swelled by approximately 16 per cent year-to-date (YTD). On August 16, CP stocks held a high RSI value of 73.01, per Refinitiv.

Russel Metals is among one of the biggest metal distribution companies in Canada and the United States. The mid-cap industrial company saw its revenue at C$ 1.36 billion in Q2 2022, up from C$ 1.33 billion posted in the previous quarter. The latest quarter's revenue was also higher than the C$ 1.06 billion recorded in the same period last year.

The RUS stock jumped by over 24 per cent in one month. According to data collected from Refinitiv, Russel stocks had an RSI value of 70 (an indication of a bullish condition) on August 16.

Badger will dole out a quarterly dividend of C$ 0.165 on October 15. Further moving to its stock performance, Badger Infrastructure stock gained by over 12 per cent in three months. According to Refinitiv, the BDGI stock saw an RSI value of 64.2 on August 16, indicating a high momentum.

Boyd Group offers auto body and auto glass repair services vis its portfolio of facilities in the US and Canada. The personal services firm reported a 37.8 per cent increase in sales to US$ 612.8 million in the second quarter of 2022 compared to US$ 444.64 million a year ago. Net profit improved by 27.1 per cent to US$ 13.29 million in the latest quarter, greater than the US$ 10.46 million reported in the second quarter a year ago.

Boyd Group stock catapulted by nearly 37 per cent QTD. According to Refinitiv data. BYD stock recorded an RSI value of 72.03 on August 16, which generally reflects a bullish trend.