Capricor Therapeutics Inc (NASDAQ: CAPR, CAPR:US) stocks took off as markets opened on Friday, September 24, registering a spike of nearly five per cent as it traded for US$ 5.26 at the time of writing this (11:25AM EST).

In the premarket trading hours, CAPR stock was up by over 16 per cent.

The US-based biotechnology company’s stock had also shot up by over three per cent on Thursday before closing at a value of US$ 5.02.

What caused CAPR stocks to spike? Let’s first find out?

Capricor Therapeutics, which aims to treat and prevent a broad spectrum of diseases with transformative cell and exosome-based treatments, had announced positive results from one of its latest clinical trials on Thursday, September 23.

This, the company said, indicated that the treatment was able to relevantly slow down the illness’ progression.

CAP-1002 is the California-based firm’s cell-based therapeutic candidate, which has been used in this study to treat patients affected by advanced Duchenne muscular dystrophy (DMD).

Capricor noted that the candidate’s mechanism of action, which is “immunomodulatory” and “anti-fibrotic”, was found to be regenerating skeletal and cardiac muscle cells.

The clinical trial’s final data was set to be presented at the World Muscle Society Virtual Congress (WMS) on Thursday.

At the time of writing this, CAPR stock noted a growth of about 50 per cent on a year-to-date (YTD) basis. In the last nine months, on the other hand, it was up by roughly 31 per cent. 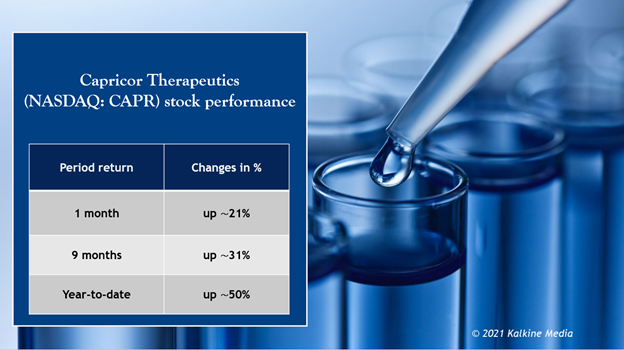 Considering that the biotechnology industry often triggers interest among investors when substantial developments take place, CAPR stocks could see a growth going forward based on how its therapeutic candidate develops.