As the world's oldest cryptocurrency Bitcoin (+0.4 per cent) and alternative cryptocurrencies to Bitcoin surged on Monday, September 27, the total market capitalization of the crypto industry was over US$ 2 trillion after a jump of 0.9 per cent in the last 24 hours, according to CoinGecko.

Like Dogecoin, WifeDoge is a meme cryptocurrency. It aims to improve upon Dogecoin through faster transaction speeds and increasing the deflationary attributes to reward users.

The users of WifeDoge are given a percentage of every transaction that occurs. As per the project's website, users start making money automatically when they hold WifeDoge. It was launched in July 2021 and as it is more or less like Dogecoin, this cryptocurrency was dubbed its 'wife'.

Tesla CEO Elon Musk's name is associated with this cryptocurrency as he has previously caused a change in prices of Dogecoin tokens in several instances. Four days after its launch on Pancakeswap, WifeDoge took to Twitter and thanked Mr Musk for tweeting about it. It also promised to surprise global investors more in the future.

The value of each WifeDoge will be equal to the value of Dogecoin and as Elon Musk has indicated about his interest in Dogecoin and Baby Doge, WifeDoge has announced on its website that five per cent of the total of WifeDoge crypto would be reserved for Mr Musk. The website mentions that these WifeDoge coins would be given to him at the right time and then they will be locked forever. 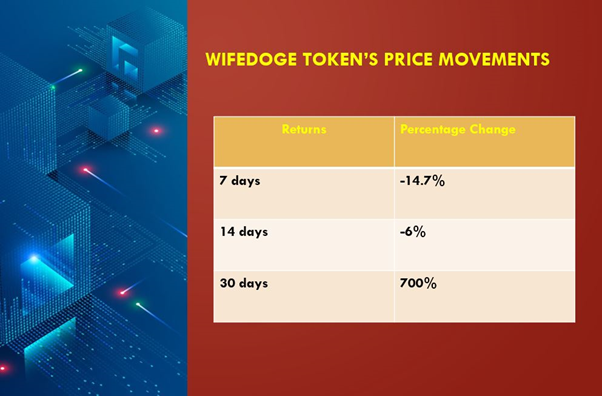 Seeing the record over the years, crypto analysts often advise traders not to invest immediately in newer cryptocurrencies. As WifeDoge is a new token, there is no record to check, so it is advisable to wait and observe before investing in it.