Banking stocks have been the talk of the town in Canada since the Prime Minister Justin Trudeau-led Liberal Party won the snap elections in September.

The factor that has been stoking this rise in interest is the possibility of a corporate tax.

During the election campaign, PM Trudeau had voiced his plans regarding the implementation of a three per cent surtax on major banks and insurance enterprises on every dollar they make over C$ 1 billion.

While the plan drew in both criticism and support, Canadian banks have noted a spike in their volume movements.

So, let’s see how top banks Royal Bank of Canada and Canadian Imperial Bank of Commerce have been doing lately.

The Royal Bank of Canada, commonly known as RBC, is one of the largest financial institutions in the country that provides banking and investment-associated services for personal and commercial purposes.

RBC, which closed trading at C$ 126.03 apiece on Thursday, is among the top active stocks on the Toronto Stock Exchange (TSX).

The financial institution held a provision for credit losses (PCL) of C$ 540 million in the third quarter of 2021.

Canadian Imperial Bank of Commerce, also known as CIBC, is among the leading financial institutions in the country that provides banking, capital market and wealth management solutions.

The Toronto-headquartered bank’s scrip, which closed at C$ 141 apiece on Thursday, has also been a top traded TSX stock, with a 10-day average trade volume of 3.5 million.

Canadian Imperial Bank of Commerce posted a YoY growth of 48 per cent in its net income of C$ 1.73 billion in the third quarter of 2021. 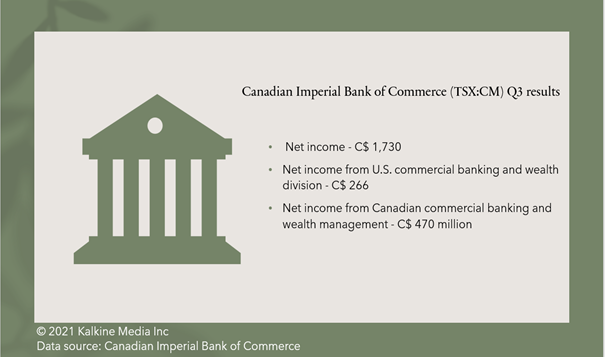 At the time of writing this, CIBC’s market capitalization stood at C$ 63.4 billion. It noted a return on equity of 15.5 per cent.

Some market experts have projected that the planned tax could see banks lose about two per cent of their income. Hence, it could also have some effect on their stock performance.