Bank stocks are essential in the Canadian equities markets. Notably, they've contributed to the wealth creation of several investors, and the stocks of the top five Canadian banks often feature in an investment portfolio of a Canadian.

The bank stocks have shown resilience in the past and have done well in the last few years. Investors often select bank stocks as they come along with reliable dividends and, generally, strong financial results.

Since the beginning of this year, markets have remained volatile. It was due to the spread of the omicron variant of the coronavirus, then fears of interest rates hikes, and now the ongoing war between Russia and Ukraine.

It is important to note that stocks of Royal Bank of Canada and Toronto Dominion Bank have managed to yield positive returns year-to-date (YTD).

The RY stock surged about three per cent YTD, and the TD stock returned 1.1 per cent in the same period. On that note, let's take a closer look at these banks.

Among the top banks in the country, Royal Bank of Canada reported a net income of C$ 4.1 billion in the first quarter of 2022, representing an increase of six per cent year-over-year (YoY).

In the earnings report, the bank revealed that its capital position remained robust in Q1 FY22 and had a Common Equity Tier 1 (CET1) ratio of 13.5 per cent. Additionally, the Royal Bank of Canada had a Liquidity Coverage Ratio of 124 per cent.

On February 24, the bank had declared a quarterly dividend of C$ 1.2 per unit to the holders of common shares, and the dividend would be payable on and after May 24. 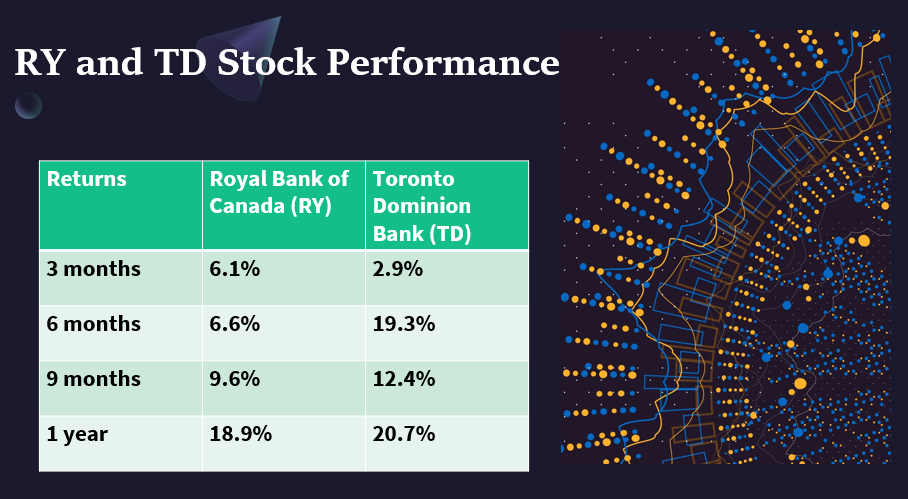 For the three months ended January 31, 2022, Toronto Dominion Bank reported its total revenue to be C$ 11,281 million, up from C$ 10,812 million in the same comparable period of the previous year.

TD Bank has declared a quarterly dividend of C$ 0.89 per unit to common shareholders, and it would be payable on and after April 30.

Please note, the above content constitutes a very preliminary observation or view based on market and is of limited scope without any in-depth fundamental valuation or technical analysis. Any interest in stocks or sectors should be thoroughly evaluated taking into consideration the associated risks.