Hut 8 Mining Corp (TSX:HUT) saw its Toronto Stock Exchange-listed stocks surge by nearly eight per cent on Tuesday, September 14. Garnering a trading volume of about 2.5 million, the crypto miner’s stock closed at a value of C$ 13.14.

The spike in its stock price seems to have been triggered by the recent announcement about its US$ 150 million public offering.

Hut 8 Mining said on Tuesday that it has agreed to sell some 17.55 million common shares for a price of US$ 8.55 apiece to its underwriters, which will bring in total gross proceeds of about US$ 150.052 million.  The public offering is set to take place in the US as well as Canada, and is expected close down on Friday.

After the price spike on Tuesday, however, Hut 8 stocks noted a 15 per cent decline at opening bell on Wednesday morning.

Let’s see how Hut 8 Mining’s stocks have been performing recently.

Hut 8 Mining, an “innovation-focused” cryptocurrency miner based in Alberta, reportedly has more self-mined Bitcoins than any other digital asset miner in the world. Its installed capacity rates is also said to be among the top in the industry.

Amid the rising popularity of cryptocurrencies, HUT stock skyrocketed by as much as 1,029 per cent in the last one year. This year, it has catapulted by nearly 224 per cent. 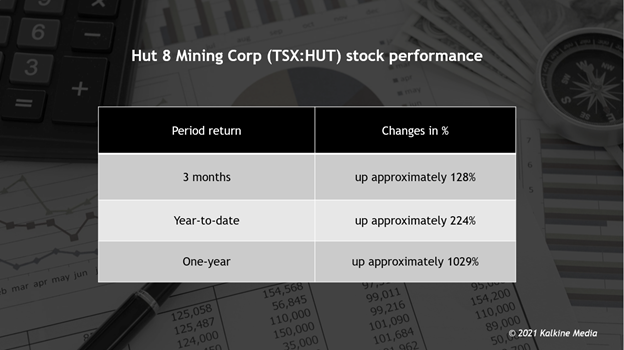 On the TSX, Hut 8 Mining is ranked high among the top price performers and financial stocks. With a 10-day trading volume of about 3.42 million, HUT stock is also one of the most actively traded scrip on the platform.

Hut 8 Mining holds a significant price-to-earnings (P/E) ratio of 31.3, Wednesday morning’s stock price decline, however, could also be something to take note of.

Cryptocurrency is an expanding field, and businesses involved in this sector could grow notably in the future. But considering that such digital assets are commonly volatile in nature, investors should bear the risks in mind before following trends.