Can an individual become a cryptocurrency trader by playing a game?

The world of cryptos is strange. It may be rife with speculative trading, but what’s the harm if someone can make a few bucks? One of the platforms capturing the imagination of many is Axie Infinity.

How does Axie Infinity work?

Developed by a Vietnamese gaming studio, Sky Mavis, Axie Infinity lets players earn cryptocurrencies as rewards. This can be done by entering into the online fictional space called Lunacia. Gamers need to have a minimum of three ‘Axies’, creatures created within the game, to begin with. Axies can be moved within the fictional world to earn coins.

The game rewards players with two different coins – Smooth Love Potions or (SLP), and Axie Infinity Shards or AXS. SLP follows a win in a battle and the winner can cash it, while AXS is earned during times of tournaments. To buy new Axies before playing the game for the first time, the player has to shell out US$600. As an alternative, the player can find a sponsor. This sponsor can lend Axies and take a cut from borrower’s subsequent earnings in the game.

The game has surged in popularity

The game was developed using the Ethereum blockchain. Lately, it has attracted many players. In April, Axie Infinity had an active user base of nearly 30,000. By August, users have hit the one million-mark.

Sky Mavis, the maker, has received funding from billionaires including Mark Cuban. Alexis Ohanian, co-founder of Reddit, was also part of a recently-concluded funding round.

The game has reached nearly US$30 million in daily Ether cryptocurrency transfers. Experts cite Axie Infinity’s ease of cashing out the crypto rewards as a key reason behind popularity. The coins, SLP and AXS, can be traded on a crypto exchange platform. AXS trades at nearly US$69 as on August 27, 2021, according to CoinGecko. The coin boasts of a market cap of nearly US$3.9 billion. Over the past one-month, AXS has surged nearly 47 per cent.

The game is primarily popular in emerging market economies of Brazil and Philippines. The government of Philippines is said to be contemplating levying taxes on income earned through the game. 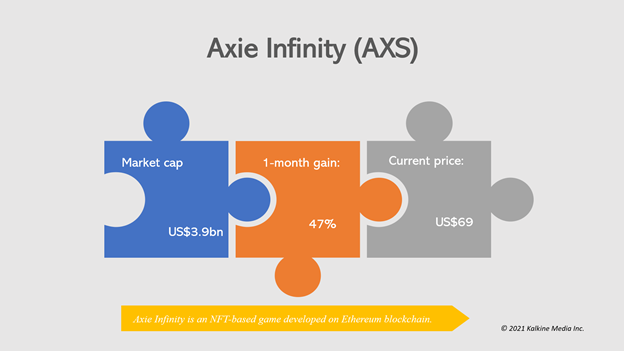 Although the game is gaining traction, and people are reporting profits, players must exercise caution. In June 2021, a DeFi token, Titan, tanked to zero. Mark Cuban was an investor in Titan. But more recently, the cryptocurrency space has rebounded. Bitcoin reclaimed the US$50,000-mark, and other cryptos like Ether and ADA (Cardano) are also making gains.

Also read: Bitcoin flies past $50,000. What is BTC’s price prediction?

The market cap of the cryptocurrency market bounced back to 2-trillion dollar mark in mid-August. This makes the crypto space on par with market values of big tech companies like Apple and Microsoft. Axie Infinity is making enough news that will help it in gaining new users.