As per their election manifesto, the Liberals stated that the corporate income tax would be increased to 18 per cent for banks and insurance companies posting earnings above C$ 1 billion. The liberals also intended to introduce a minimum tax system, thereby ensuring a minimum of 15 per cent tax.

The S&P/TSX Capped Financial index posted a Year-to-Date (YTD) return of 20.83 per cent and posted a growth of 0.31 per cent on September 21.

On that note, let us look at how some of the Canadian banking and insurance stocks are poised.

Manulife Financial paid its shareholders a quarterly dividend of C$ 0.28 per share on September 20. The dividend grew at a three-year average of 8.39 per cent.

The insurance company posted annualized premium equivalent (APE) sales of C$ 1.4 billion in the second quarter of the fiscal year 2021, which was an increase of 30 per cent Year-over-Year (YoY). Its net income was C$ 2.6 billion in Q2 FY21. The company collaborated with Rewardz, a reward solution company, to mark its presence in Asia during the quarter.

The valuation metrics show that the insurance corporation held a price-to-earning (P/E) ratio of 6.5, the return on equity (ROE) was 14.82 per cent. The company also had a market cap of C$ 45.97 billion on September 22.

The one-year stock return of Manulife Financial was close to 28 per cent, and its stock price was C$ 23.67 apiece at market close on September 21. 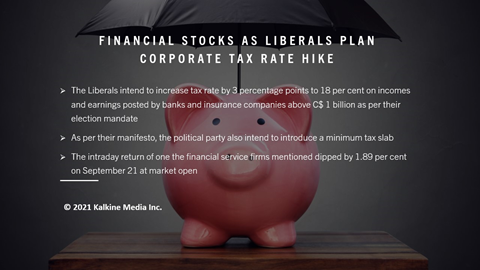 The diversified Canadian bank provides a wide range of banking services to medium and small enterprises, and its customer base includes both retail and institutional clients. On September 23, Canadian Western Bank is set to roll out a quarterly dividend of C$ 0.29 per share. The dividend yield was 3.24 per cent on September 22.

Canadian Western Bank posted total revenue of C$ 263.2 million in Q3 FY21. Their loans were C$ 32.3 billion, an increase of 9 per cent YoY in the same quarter.

The bank's senior leadership commented that the bank is set to launch its enhanced digital banking platform designed for its small business clients.

As a part of its community service, the life insurance company announced a donation of C$ 400,000 to Spirit North as per its latest report. This fund is intended to support the health program for youth and children.

Sun Life Financial reported a net income of C$ 900 million in Q2 FY21, driven by business growth and a lower effective tax rate. Also, a favorable credit environment during the quarter was cited as a factor.

On September 29, the life insurance company is scheduled to roll out a quarterly dividend of C$ 0.55, and the dividend yield stood at 3.48 per cent on September 22.

Over the past year, the stock price of the insurance company increased by 17 per cent and closed at C$ 63.08 on September 21.

Although Royal Bank of Canada is based in Canada, it conducts banking operations in the US and other countries. The bank provides full-fledged banking services to its customers. The bank will likely roll out a quarterly dividend of C$ 1.08 on November 24. The five-year dividend growth rate was 6.3 per cent, while the dividend yield was 3.44 per cent on September 22.

Royal Bank of Canada posted a reported net income of C$ 4.3 billion in Q3 FY21, an increase of 34 per cent YoY. Driven by better macroeconomic scenarios and improved credit quality, the provision on performing loans in the same quarter was C$ 638 million.

The stock price of Hut 8 Mining ballooned by 83 per cent on a quarter-to-date (QTD) and skyrocketed by 982 per cent over the past year. On September 21, the stock price closed at C$ 9.85.

It is believed that the implementation of the tax plan drafted by the Liberals will likely affect the banking and insurance sector in subsequent quarters, however, it could go either way.