Although the S&P/ TSX Venture Composite Index, which includes the following lithium stocks, has fallen by about 18 per cent, one need not undermine their future potential and keep in my the EV demand. Let us talk about them.

Along with its partners and South Arkansas Community College, Standard Lithium unveiled six new EV charging stations in El Dorado, Arkansas, on May 2. The lithium producer saw its stock grow by about 92 per cent year-over-year (YoY).

SLI stock has breached various resistance and support levels since its 52-week high of C$ 15.92 (October 27, 2021). Its Relative Strength Index (RSI) value never fell below 30 throughout the past one year and stood at 42.20 on May 6, according to Refinitiv.

Sigma Lithium conducted a feasibility study at its 100 per cent owned Grota do Cirilo site in April to start lithium production. The mid-cap company said that the Phase 1 study included a base case to manufacture 2,30,000 tonnes per annum (tpa) of six per cent battery-grade lithium for eight years.

Frontier Lithium revealed its 2022 exploration program and targets, including drilling at the Spark deposit, mapping and prospecting, for its PAK Lithium Project on May 2. The company believes that there are more discoveries on the way, considering the Pennock pegmatite, which could help it in expanding its lithium resource base.

American Lithium was one of the top-performing Venture 50 companies listed on the TSX Venture Exchange (TSXV) in 2022. Stocks of American Lithium were up by almost 50 per cent and had an RSI value of 42.16 while writing.

In addition, American Lithium is also exploring uranium opportunities at the Macusani site in Lima, Peru. Hence, this stock could also widen investors’ exposure to the uranium market.

Rock Tech Lithium was also named among the top 50 venture lists in 2022. The company aims to manufacture and supply lithium hydroxide manufacturers operating in Canada and Germany. 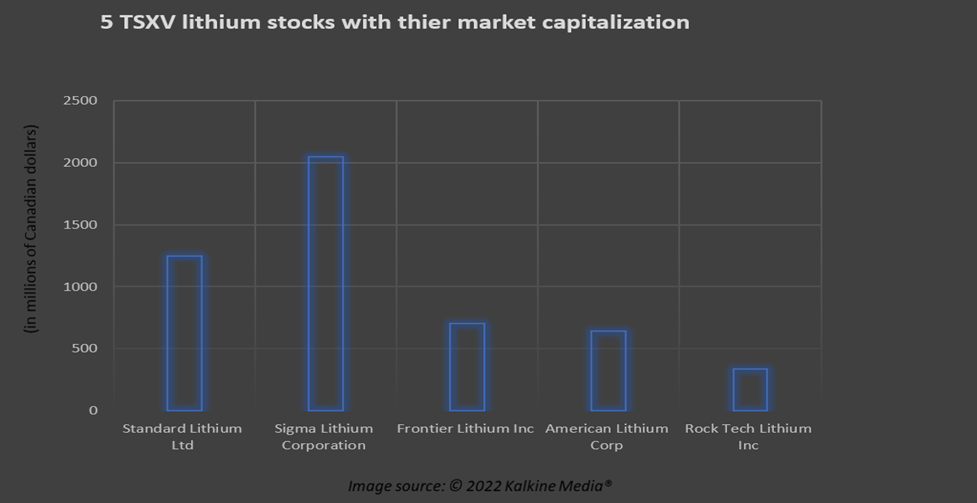 The clean energy revolution has spurred people’s interest in EVs, and Lithium, being a key component, could also witness significant demand in future. Hence, such lithium stocks could help investors earn notable gains in future.