Gevo Inc (NASDAQ:GEVO, GEVO:US), a hydrocarbons maker, saw its stocks rocket by over 37 per cent on Thursday, September 9, closing at a value of US$ 7.94.

The clean energy stock also recorded a day high of US$ 8.27, up by nearly 43 per cent from the previous day’s closing price, during the trading session.

Gevo’s business focuses on the transformation of carbon and clean energy into energy-dense liquid hydrocarbons, which can yield net-zero greenhouse gas (GHG) emissions when be used for fuels like gasoline, diesel.

Let’s take a closer look at what cause this significant jump for Gevo stocks.

Investors appear to have become quite excited about Gevo’s latest news, where the company announced bagging a major oil and gas player.

Gevo said on Thursday that it has joined hands with Chevron USA Inc, which is a subsidiary of American oil giant Chevron Corporation (NYSE:CVX, CVX:US), to invest in developing one or more sustainable energy production facilities.

These facilities, the statement said, would focus on processing inedible corn to churn out clean aviation fuel, while also producing protein and corn oil. 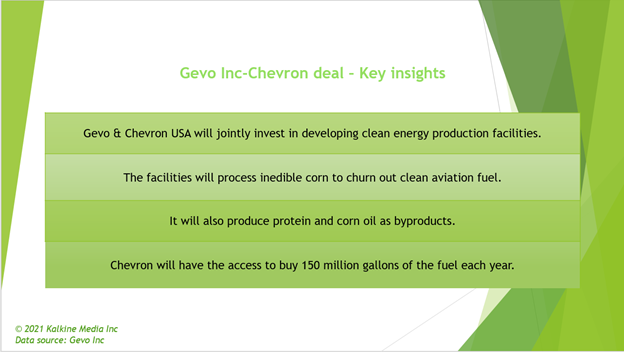 How does this deal impact Gevo Inc & its future stock performance?

As a renewable energy producer, Gevo is likely to have an upper hand in terms of working with the clean technology to produce sustainable aviation fuel. As for its collaboration with Chevron, the early-stage energy firm can be expected to benefit from working closely with an established oil giant.

Chevron’s collaboration with Gevo, on the other hand, could be linked with its carbon reduction goals. Having created an individual unit to focus on decarbonization, the company also recently revealed its plans of coming up with a clean aviation fuel for Delta Air Lines (NYSE:DAL, DAL:US).

Chevron's interest in Gevo could also draw the attention of more major players in its clean energy production technology. So far, Gevo has seen big companies like Delta show interest in its hydrocarbons project, Net-Zero.

For its co-investments, Chevron will have the access to buy about 150 million gallons of the fuel produced in the new facilities each year.

Gevo stocks reflected a decline of 18 per cent in the last six months, possibly triggered by investors’ loss of interest amid a lack of any major partnerships or projects.