The uranium stocks jumped in Canada on June 7 after it was reported that the United States is mulling reducing its reliance on Russian uranium imports and procuring more uranium domestically.

Some published reports suggest that the Biden administration is urging lawmakers to accept a US$ 4.3 billion proposal to enhance the country's enrichment capabilities, as well as other measures necessary to convert uranium into nuclear reactor fuel.

Notably, Canada is the world's second-largest producer of uranium and accounts for 13 per cent of the total production worldwide. Hence, such a proposal might benefit Canadian uranium producers.

Let's look at five uranium stocks listed on the Toronto Stock Exchange you could consider exploring this year:

Cameco is a major uranium producer across the globe, and it reportedly can enhance yearly uranium production in the long run by restarting closed mines.

On Tuesday, the CCO stock jumped 7.8 per cent and closed at C$ 33.85 per share. Cameco distributed an annual dividend of C$ 0.12 per unit to the shareholders. 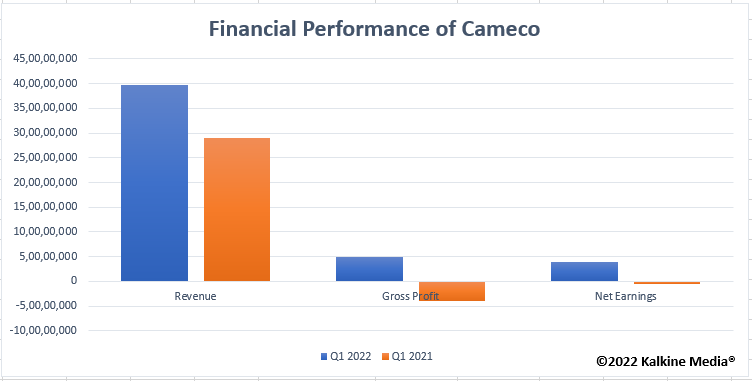 The company is involved in acquiring and developing uranium properties in Canada. In April, NexGen said it signed an agreement with Clearwater River Dene Nation to cover the phases of the Rook I Project, which hosts a full Arrow uranium deposit.

The corporation holds a 100 per cent stake in the Triple R uranium deposit, located on the south-western outskirts of Canada's Athabasca Basin.

Fission Uranium said in April that it has completed the repayment of the outstanding US$ 7 million balance on its secured credit facility and is now debt and lien-free. The company has no debt and had approximately US$ 40 million in cash and cash equivalents as of April 7, 2022.

The FCU stock recorded a surge of 10 per cent during the trading session on June 8 and closed at C$ 0.85 per share.

The Canadian company explores and produces uranium through its subsidiaries, and it has business operations in Turkey as well. In April, Global Atomic Corporation said it aims to expand the Dasa Project to enhance uranium production.

Recently, the corporation announced financial results for the first quarter and said its revenue was C$ 432,116. Meanwhile, as of March 31, the cash balance was C$ 24.3 million.

The GLO stock closed at C$ 3.42 apiece on Tuesday after climbing around nine per cent during the day.

Denison has a 95 per cent stake in the Wheeler River Uranium Project, and its stock is on the rise as investors hope that Canadian uranium companies could benefit in future.

The DML stock's volume of shares traded on the TSX was 4.16 million, and its price increased by 8.3 per cent on Tuesday. The DML stock was priced at C$ 1.7 per share at market close.