BRP Inc (TSX: DOO) stocks saw a spike of over eight per cent at one point on Friday morning, March 25, in the wake of its Q4 and annual results for fiscal 2022 being released.

The enterprise also released a statement announcing the return of the Can-Am brand featuring an all-electric motorcycles line-up. The vehicles and parts company said this launch of a family of two-wheel motorcycles would mark the 50th anniversary of the Can-am brand, first introduced in 1973.

However, according to the latest earnings report, its Q4 diluted EPS declined by C$ 0.45 YoY to C$ 2.50 per share. 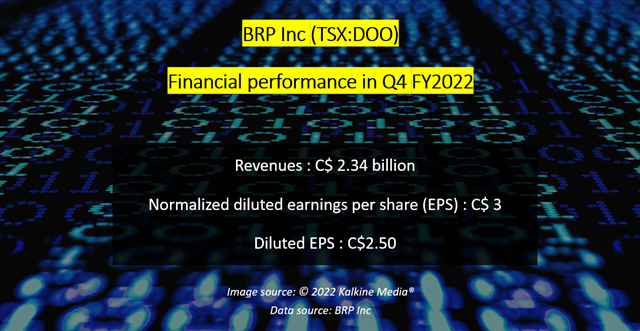 BRP believes that bringing its planned line-up to dealers’ showrooms will solidify its financial strength and enhance reach in the key markets. However, investors should analyze market dynamics and track changes in the automobile and electric vehicles (EV) market to make fully informed investment decisions.