Canada's anti-trust regulator wants to speed up its case against Rogers Communications Inc's (TSX: RCI.B) C$20 billion ($15.8 billion) purchase of Shaw Communications Inc (TSX: SJR.B) with a process that would schedule a dispute hearing in five to six months.

A spokesperson for the Competition Bureau Canada told Reuters on Thursday the competition commissioner wants to follow an expedited process. The competition tribunal's website says this would mean a hearing in five to six months. Ordinarily that period is about a year. 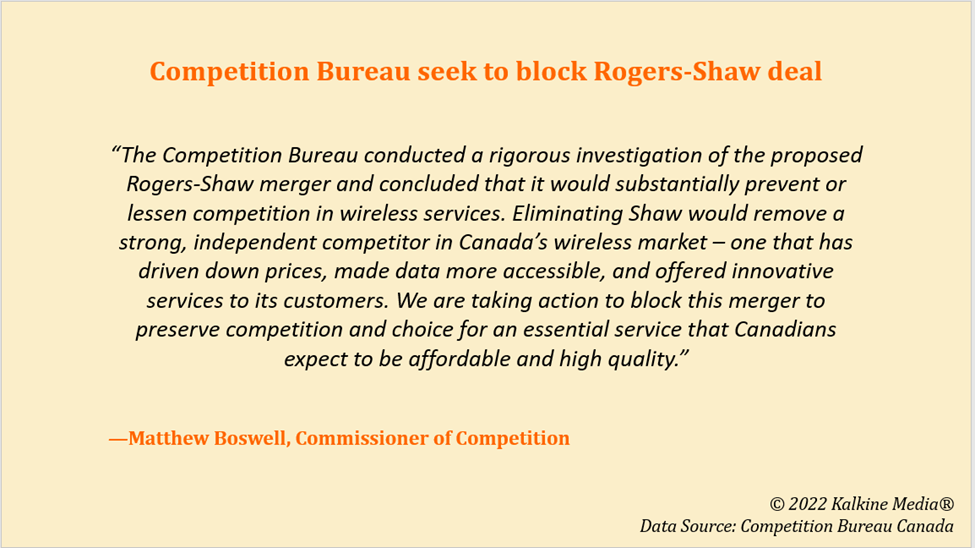 Also read: Rogers-Shaw deal in hot water, but are RCI and SJR stocks still a buy?

Rogers and the bureau could work towards a settlement even if the matter proceeds to the tribunal.

Rogers has offered to sell Shaw's Freedom mobile unit to allay competition concerns, but the bureau has said that is not sufficient. Last week, Rogers disagreed with the bureau's contention that the deal would lessen competition, and the bureau said it would file its response by June 16.

The battle is playing out against the backdrop of Canada's concentrated telecoms market, which has resulted in consumers paying the highest wireless bills in the world, according to Rewheel, a Finnish telecom research firm.

Rogers did not respond to a request for comment but has said in the past that a settlement was the best path forward to ensure the benefits of the transaction.

Rogers and Shaw have argued that a merger would ensure Shaw remains competitive as it has been unable to compete in a market dominated by Telus (TSX: T) and BCE (TSX: BCE). Shaw has said it has reduced investment as it has struggled.

Even with an expedited timeline, the dispute increases uncertainty about the acquisition, which has a July 31 closing. One alternative would be for Rogers and Shaw to agree to extend the closing date.

Shaw shares are at a 12.5% discount to Rogers' offer price, underscoring the uncertainty. The bureau has not won a merger challenge before. Of eight that have gone before the tribunal, it lost or settled six, and two are pending, according to official data.