Stocks of Rogers Communications Inc (TSX:RCI.B) seem to be going through the roughest patch since the pandemic-triggered market crash last year amid a power tussle within the business family.

The telecom giant’s stock plunged nearly six per cent on Monday, October 25, its sharpest dip since March 2020, after late founder Ted Rogers’ son Edward Rogers pushed out his latest statement asserting himself as the chairperson on Sunday.

Let’s dive in to get a clearer picture of this tussle and its impact on Rogers’ stock performance.

While the crisis came into limelight only recently, troubles seem to have been brewing within the Rogers dynasty for a while now.

Reports claims that around September, Edward Rogers had tried to replace the company’s president and CEO Joe Natale with then CFO Tony Staffieri – a plan that is said to have become prematurely public by accident.

Once the secret was out, Rogers Communications’ board of directors voted to retain Mr Natale, while Mr Staffieri was seen leave the company on September 29.

The family-cum-business conflict reached a new level last week, on October 21, when a company statement announced that Edward Rogers was being replaced by John A MacDonald as the chairperson of the board.

While his mother and sisters voted in favor of his ousting, Edward Rogers quickly responded by announcing his plans to replace five independent directors with his own nominees from the Rogers Control Trust, which he was still the chair of.

The two factions of the company have been posting newer statements slamming the other’s last one since, with the latest one being Edward Roger’s claim to the board’s chair and threat to escalate the matter to court.

Twitter, meanwhile, has been witness to whole different level of lash-outs, with Ted Rogers’ daughter Martha Rogers threatening to reveal information about her brother with “full receipts”.

What’s the status of Rogers stocks? 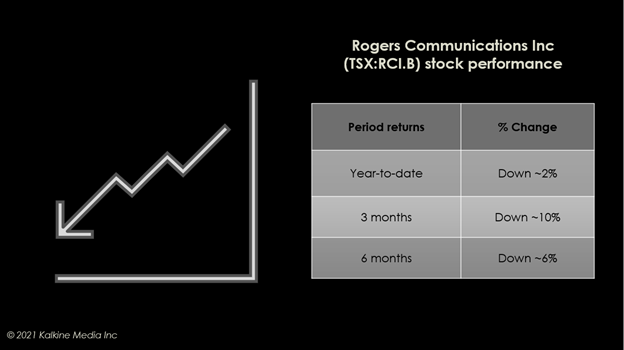 The telecom giant’s stock only holds a growth of about seven per cent on a year-over-year (YoY) basis.

This week so far, Rogers’ stock has plummeted by almost six per cent.

Rogers is one of the largest telecom players in Canada, currently on the verge of becoming even bigger amid its merger with peer Shaw Communications (TSX:SJR.B).

However, if the family dispute continues, some market experts believe that Rogers’ stock performance is likely to continue to be impacted.