Cineplex (TSX: CGX) stock is soaring, and there is a reason for that! The Canadian movie theatre chain has just announced that its box office revenue approached pre-pandemic levels in the first quarter of fiscal 2022.

Also read: GOOS and BLX: These under-$40 midcap stocks should be on your radar

The surge came as the company welcomed 6.7 million guests to its theatres and noted a box office revenues per patron (BPP) of C$ 12 during Q1 FY2022.

Around the time of opening bell, Cineplex stock was up by a significant eight per cent on Friday, May 13.

What else should investors learn about Cineplex's performance in the latest quarter? Let’s see.

Cineplex Inc recorded total revenues of C$ 228.7 million in Q1 FY2022, marking a notable growth of 452.3 per cent year-over-year (YoY). Its theatre attendance considerably improved to 6.7 million in the latest quarter compared to 0.4 million a year ago, primarily due to eased COVID restrictions. 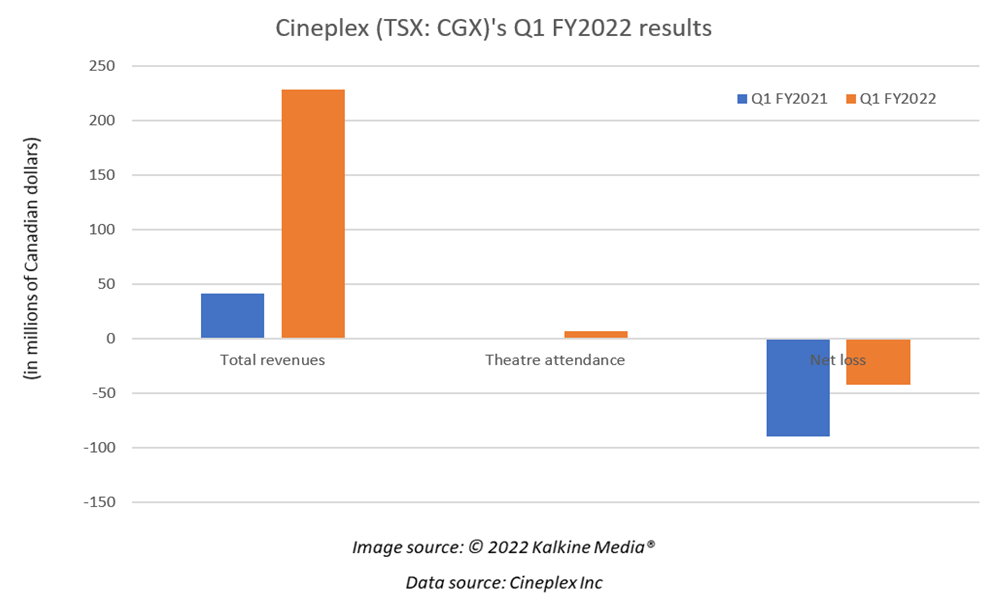 Cineplex's Relative Strength Index (RSI), which suggests whether a stock is oversold or overbought, improved to 44.7 on May 13, according to the data collected from Refinitiv.

Cineplex has reported YoY revenue growth across its divisions, including film and entertainment content, media, and amusement and leisure, in Q1 2022. Considering its latest quarterly results, this small-cap company is could continue to emerge from the pandemic setbacks if market conditions prevail.