The cannabis industry is a big booster for the Canadian economy. Though the S&P/TSX Cannabis Index shows a 49.5 per cent year-to-date decline, a recent Statistics Canada report said cannabis sales contributed over C$ 9.6 billion to the country's GDP in July this year. This is a 19 per cent year-over-year climb. The country’s four top pot producers, namely Canopy Growth Corp, Aurora Cannabis Inc, Cronos Group Inc and Aphria Inc, together contribute about C$39 billion in market capitalization. But the big shots aside, there are a few up-and-coming cannabis companies that have been catching investors’ eyes. The TMX Group recently released a list of “10TSX Venture Exchange Cannabis Companies with Plans for Growth” that includes names of pot firms such as 48North Cannabis (TSXV: NRTH), VIVO Cannabis (TSX: VIVO), Namaste Technologies (TSXV:N), FluroTech Ltd (TSXV: TEST), Organigram Holdings (TSXV: OGI),etc.

Let us take a detailed look at these cannabis stocks:

Based in Toronto, the company plans to expand its production space by 200,000 square foot for the medical cannabis products it is set to develop with pot firm DelShen Therapeutics. Back in June, it launched a pressed-hashish product in British Columbia, which it has since released in other provinces.

The company recorded a 56 per cent year-to-date (YTD) decline in its stock price, but it climbed nearly seven per cent in the last six months. It is currently ranked high on the TSXV among junior cannabis stocks. 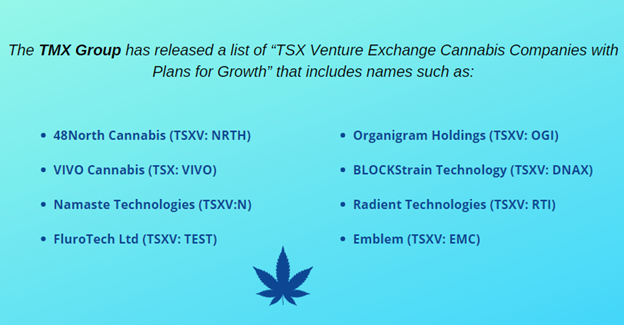 Based in Napanee, Ontario, VIVO Cannabis has businesses across Canada, Germany, and Australia. Currently producing 625 kilograms of cannabis annually, the company plans to expand its operations further by building a 100,000 square foot facility. VIVO Cannabis has also launched an online store recently.

VIVO Cannabis traded on the TSXV until January 2020, before graduating to the Toronto Stock Exchange.

The stocks fell 12 per cent in the last six months and also recorded a 12 per cent decline YTD.

Shares of Namaste Technologies slid 12 per cent in the last six months and about 19 per cent YTD. However, it is currently trending high on the TSXV among junior cannabis and junior consumer goods stocks.

The pot company recorded a 73 per cent year-over-year (YoY) increase in its net revenue of C$6.9 million in its second quarter ending 31 May 2020. Its subsidiary CannMart’s net revenue surged about 1500 per cent YoY, amounting to over C$2.3 million (excluding excise tax).

Based in Calgary, Alberta, FluroTech Ltd focuses on the technology of cost-effective ways to test cannabis. Its products include CompleTest, which is used to measure specific contents in cannabis products.

FluroTech Ltd is currently ranked high among trending junior cannabis and health care stocks on the TSXV. Its shares saw an impressive climb of 188 per cent in the last six months and a substantial 47 per cent YTD.

The surge in its stock price came after FluroTech Ltd announced the “successful function” of its real-time, saliva-based immunoassay for detecting COVID-19 infection in September. The product was formed through an agreement with Alberta BioPhotonics Inc and Albany Medical College.