Many market analysts and advocacy groups expect a change in regulation related to the sale of pot-infused beverages. In early 2020, when cannabis-based beverages were first sold in the market, many leading cannabis companies could attract new consumers by launching innovative cannabis beverages.

A restriction on the purchase of six-packs of cannabis beverages laid forward by the Cannabis Council of Canada is believed to have hurt the revenue of these cannabis-producing companies.

Cannabis-producing companies rely upon the sale of cannabis products and cannabis beverages for growth.

The S&P/TSX Capped Health Care Index, which comprises some of these cannabis companies, posted a year-to-date (YTD) return of 0.42 per cent.

Let us consider some of the Canadian cannabis stocks to look at.

The drug manufacturing company cultivates and also sells cannabis, including both medicinal and recreational. Medicinal cannabis is sold and exported to over 20 countries, and Aurora Cannabis is headquartered in Canada.

The cannabis producing company held a market cap of C$ 1.6 billion and posted a price-to-book (P/B) ratio of 0.23 on September 28. 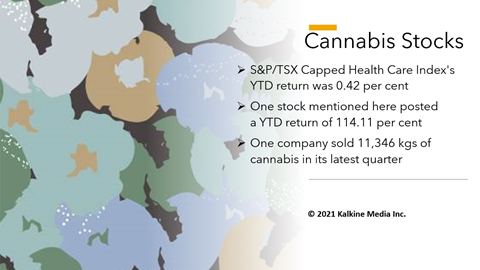 The diversified cannabis company ventured into the health and wellness division in Canada, the US, and Europe. The medical cannabis division of Canopy Growth is a market leader in Germany and Canada. Some of the innovative products of the company are softgel capsules, infused beverages, etc.

During the quarter, Canopy Growth acquired Supreme Cannabis and Ace Valley, as per the latest report.

On September 27, the stock price of Canopy Growth closed at C$ 18.59 that traded eight per cent above its 52-week low price. The stock price dipped by close to two per cent over the past year. However, it increased by nearly six per cent on a week-to-date (WTD) basis.

Tilray operates as a consumer-packaged goods and cannabis manufacturing company. The company runs its operation in Europe, Canada, Australia, and the US.

Tilray produces and supplies cannabis to over 20 brands in more than 20 countries. Some of the products are hemp-based food, alcoholic beverages, etc. As per the latest quarterly report, Tilray partnered with ROSE LifeScience to boost cannabis distribution in Quebec.

The drug manufacturing company posted a P/B ratio of 8.8 and held a market cap of C$ 7.11 billion on September 28.

HEXO achieved carbon neutrality in September 2021 by offsetting carbon emissions levels of 2020. The company offset 25,965 tonnes of carbon in addition to ocean-bound plastic equivalent to 3.55 million plastic bottles, as per the management’s commentary.

The management of HEXO commented that it intends to acquire 48North and Redecan to become the leading producer of recreational cannabis.

The Alberta-based cannabis producing company is engaged in the wholesale distribution of smoking and cannabis-based products. High Tide got listed on the Toronto Stock Exchange Venture after the successful launch of its initial public offering (IPO) on December 17, 2018.

With the launch of new cannabis retail stores in Kanata and Gloucester, High Tide increased its presence in Ottawa, as per its latest report.

Many analysts believe that changes in the regulation on the purchase and sale of cannabis can impact cannabis-producing companies.