It is well after midnight, and it is still unclear who will claim the presidential throne in the United States in 2020. At the time of filing this story, Republican presidential nominee Donald Trump, who’s seeking a re-term, won 213 electoral votes. The Democratic challenger Joe Biden is ahead with 227 wins.

The magic number to watch is 270. The winning candidate’s path to the White House must be supported by at least 270 electoral votes.

The race is still too close to call and some political pundits say that it may take days to find out who will win.

What’s at stake for Canada?

As the election saga unfolds in the south of the Canadian border, it is impossible to stay aloof.

US is Canada’s biggest trading partner. Nearly three quarters of Canadian exports, equivalent to one-fifth of Canada’s entire Gross Domestic Product (GDP), lands in the US.

But Canada’s reliance on the United States is not just limited to trade and economy. A lot hinges on the long-term vision of the next US president.

The current US president’s relationship with Canada hasn’t been so smooth. Trump has been at odds with the Trudeau government, opening disregarding green environment policies, the Paris Climate Accord and NATO.

Many Canadians fear Trump may impose unilateral trade policies and taxes hampering businesses across the border. In August, he  reignited the aluminum tariff war on Canada, reimposing 10 percent tariffs. Canada, too, slapped back retaliatory tariffs.

A recent study from Pew Research Centre shows Canadians favorable ratings of the US plummeted since Trump first took office. In 2020, the ratings dropped to its lowest level in 20 years, with just one in five Canadians believing in Trump.

With Democrats political and economic issues wont magically disappear, but things will be more stable, suggest some analysts. Biden is pro-green economy plan, which will sit well the Trudeau administration. 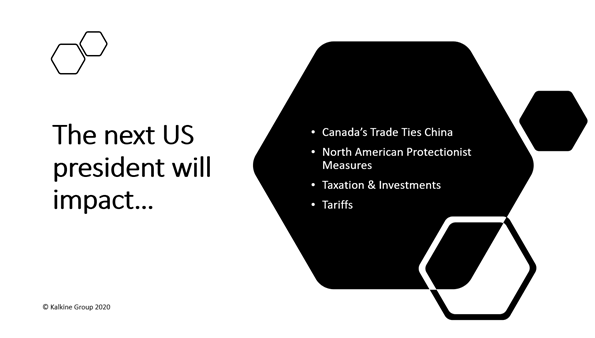 The next US president will impact Canada’s trade ties China and North American protectionism policies.

Irrespective of who wins the critical US elections, equity investors are expecting a hike in taxes in the coming years and investment restrictions.

Biden, like the Canadian finance minister Chrystia Freeland, believes in taxing the super-rich. He is also likely to jack up corporate taxes on offshore operation companies to 28 per cent from the current 21 per cent.

If Trump is re-elected, Canadian businesses expect a slew of tariffs leading to trade disputes.