The pandemic has already started leaving its mark on year 2022, thanks to the omicron variant. Stock markets have been facing significant ups and downs amid the rising cases of COVID-19 and the reintroduction of lockdown measures, sending the stock prices of many companies deep into the red zone.

Hence, with more investors looking for quality stock options to explore in 2022, let us glance through the top 25 stocks of the TSX.

With a market capitalization of C$ 201 billion (as on Wednesday, January 26), RBC is the largest company listed on the TSX.

RBC’s quarter-based dividend of C$ 1.2 apiece, which has grown by 6.3 per cent in the past five years, is set to paid on February 24 to shareholders. 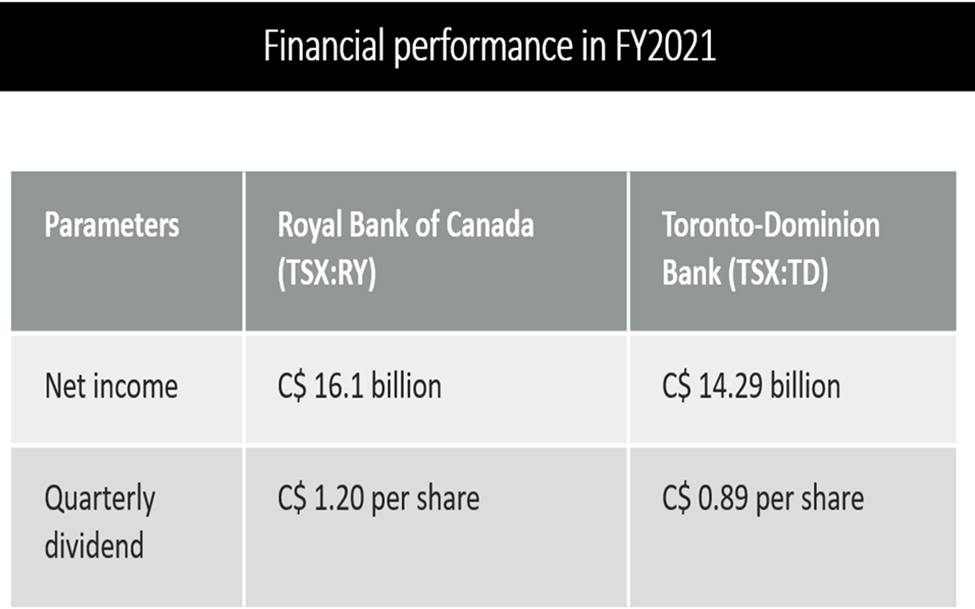 Like other major banks in the country, Scotiabank too saw its profit surge to xx on a year-over-year (YoY) basis in the fourth fiscal quarter last year.

Scotiabank’s market cap stood at C$ 109.99 billion on January 26. Its quarterly dividend, which presently stands at C$ 1 per share, was also scheduled for payment on the same day.

The Canadian railway company, which provides transportation services and a railroad system across North America, saw its market cap stand at C$ 106.4 billion on January 26.

The Montreal-based firm recently reported a topline of C$ 3.75 billion for the fourth fiscal quarter of 2021.

Enbridge Inc is scheduled to doll out its dividend of C$ 0.86, which it pays on a quarterly basis, on March 1.

The Calgary, Alberta-based energy giant, which is known to produce crude oil, natural gas liquids, etc., distributed a dividend of C$ 0.58 on January 5.

The CIBC’s quarterly dividend, which currently amounts to C$ 1.61 apiece, is expected to be distributed on January 28.

Thomson Reuters, a media and communication giant, is known to offer its services across multiple industries, including news, law, government, etc.

The energy company held a market cap of C$ 62.8 billion on January 26.

Canadian Pacific Railway, also a transcontinental railroad network that delivers freight, logistic and supply chain solutions in North America, is set to pay a dividend of C$ 0.19 on January 31.

The railway company held a market cap of C$ 62.3 billion on January 26.

The Verdun, Quebec-based communications and mass media enterprise has a history that goes as far back as the 1880s, when it was first known as the Bell Telephone Company of Canada.

BCE Inc is presently known to offer communication solutions in the fields of television, digital media and wireless services.

The Canadian convenience store operator is known to function in many regions across the world. It offers a wide range of goods in its stores, including groceries, fresh produce, beverages, tobacco-based products, etc.

Alimentation Couche-Tard, as on January 26, had a market cap of C$ 51.7 billion.

Known to be a giant in the Canadian space of oil and gas production, Suncor Energy’s market cap was C$ 51.5 billion on January 26.

The Calgary, Alberta-based energy producer, which has been in business since 1917, is popularly known to explore fossil fuels like crude oil and natural gas. It has been, however, looking into clean energy resources such as wind electricity, biofuel, etc., as well.

The Canada-based fertilizer giant came into being after businesses Agrium and PotashCorp combined in 2018.

Nutrien Ltd, which is known to provide cultivation-related goods and services, has its base in Saskatoon, Canada, but operates across North and South Americas, Asia, Australia, etc.

The Toronto-based insurance giant, originally established as Manufacturers Life Insurance Company in 1887, caters to clients across Europe, Asia, the US, etc.

Constellation Software, a Canadian software services provider, caters to the needs of market leaders across different industries in the public as well as the private sectors.

Headquartered in Toronto, Ontario, the tech player manages businesses across in North America, Europe, Australia, among others.

Now a major gold and copper miner based in Canada’s Toronto region, Barrick Gold Corporation was first established in the 1980s.

With operations around the world, the gold explorer posted a market capitalization of C$ 42.9 billion as on January 26.

Also one of the top financial services providers in Canada, Sun Life Financial Inc caters to the insurance and wealth product-related needs of its clients in in Canada, the US, Asia, the UK, etc.

The Canadian insurance giant closed trading at a market cap of C$ 41.1 billion on January 26.

The Canadian solid waste management solutions provider is known to provide its services, which include waste collection, recycling and disposal, across Canadian provinces and many states across the US.

Telus Corporation is known to be a juggernaut in the Canadian telecommunication space. Through its many subsidiaries, Telus provides services in the arenas of wireless connectivity, wireline connectivity, mobility, healthcare, agriculture, etc.

The Vancouver-headquartered company reported a bottomline of C$ 358 million in Q3 FY2021 and doled out a quarterly dividend of C$ 0.327 on January 4.

The integrated energy company, which delves in the business of producing crude oil and natural gas in Canada, posted a cash of C$ 2.1 billion from its operating activities and adjusted funds flow of C$ 2.3 billion in Q3 FY21.

Imperial Oil Limited, also a Canadian integrated energy company, is known to be among the biggest oil refiners in the nation.

Founded in 1880, the oil and gas enterprise now holds an assortment of oil sands assets, refineries, producing wells, etc. in its portfolio.

Stock markets are consistently exposed to volatility posed by certain major events, such as economic changes, government policies and, of course, healthcare-related events like a pandemic.

Hence, stock market investors should ideally be in constant touch with market trends to not only avoid losses, but also to access the best possible deals.