The stocks of Activision Blizzard, Inc. (NASDAQ:ATVI) surged at market open on Monday, May 2, after it was reported that Warren Buffett's company Berkshire Hathaway (NYSE:BRK.A) now owns a 9.5 per cent stake in the American video game holding company.

Activision Blizzard is in a merger agreement with Microsoft (NASDAQ:MSFT). However, there are concerns that the deal won't be closed by regulators.

Earlier this year, it was announced that Microsoft would acquire the video game maker and had agreed to purchase its shares for US$ 95 per share. As of market close on April 29, the ATVI stock was priced at US$ 75.6 per share.

Some reports suggest that before the merger announcement, Berkshire Hathaway had purchased a stake worth US$ 1 billion in Activision Blizzard and that investment now amounts to US$ 6 billion, including the latest purchase.

Also Read: 3 TSX smart penny stocks to buy in May

As Warren Buffett is probably the most followed man by retail investors, we have shortlisted two stocks that could be on his portfolio and are listed on the Toronto Stock Exchange.

Let's look at these two TSX-listed stocks and find out more about them:

It is one of Canada's leading consumer cyclical stocks, and as of writing, the QSR stock was trading at C$ 73.03 per share. Restaurant Brands' portfolio includes chains like Tim Horton's, Popeyes Louisiana, and Burger King.

Some analysts believe that a Relative Strength Index (RSI) value of 50 represents a neutral position in the market, which means a balance between the bears and the bulls.

The QSR stock's RSI value is 49.1, according to Refinitiv data, which is slightly below the neutral mark. Also, the RSI stock's moving average (20-day) was upwards at 74.68.

Generally, if the moving average is angle up, the price is moving up overall. However, this is a basic analysis, and potential investors could research further before investing.

Suncor Energy was once the leading stock in the energy sector. However, it has declined over the past few weeks and recently received a letter from a stakeholder that it needs to change its strategies to better the shareholders. 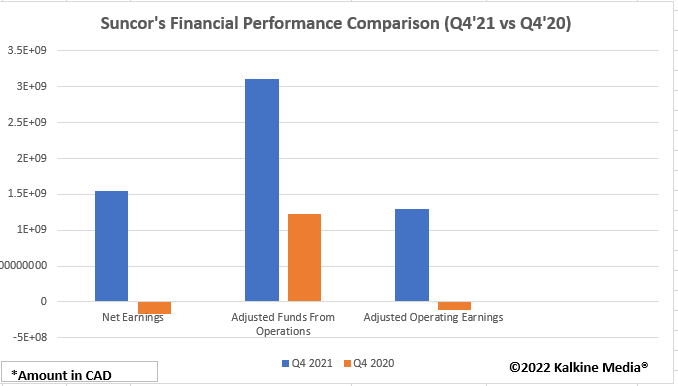 At 10 AM EST, the SU stock was down by about two per cent and trading at C$ 45.43 per share. However, the financial results in the fourth quarter of 2021 improved from the same quarter of the previous year.

Meanwhile, the oil and gas company paid a quarterly dividend of C$ 0.42 per unit and registered a dividend yield of 3.6 per cent.