When is D-Wave Systems going public & where can you buy this stock?

D-Wave Systems Inc., the Canada-based quantum computing company, is looking to go public in the US equities market. However, it will not take the traditional initial public offering (IPO) route.

The quantum computing system is expected to merge with a blank-check company called DPCM Capital, which trades on New York Stock Exchange (NYSE) under the stock symbol XPOA.

DPCM Capital is a special purpose acquisition company (SPAC), and its merger deal values D-Wave Systems at approximately US$ 1.2 billion.

When is D-Wave Systems going public?

Under the deal, D-Wave Systems Inc. and DPCM Capital will merge to form a combined entity called D-Wave Quantum Inc. The shares of this company are expected to trade on the NYSE under the ticker symbol QBTS.

D-Wave is expected to receive US$ 340 million from the deal, which includes a US$ 40 million PIPE investment from Goldman Sachs Asset Management, Aegis Group Partners, and NEC Corporation, among others. 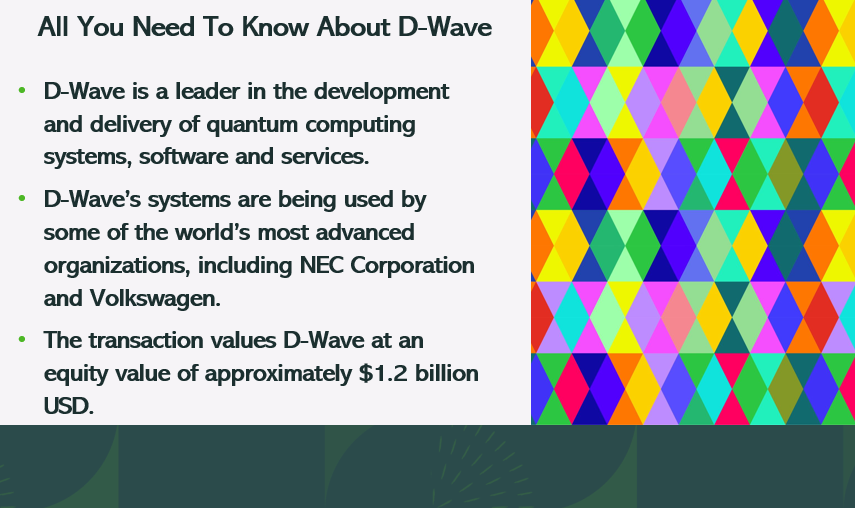 Once the company starts trading in the stock market, retail investors will have an option of buying the D-Wave stock through stockbrokers and online trading platforms of brokerage companies.

The deal has received approval from the board of directors of both the companies, and it will most likely close in the second quarter of this year.

So, we can expect that the QBTS stock will be available in the equities market after June 2022 if it meets customary closing conditions, including the DPCM Capital shareholders' approval.

The Canada-based company will use the money raised in gross proceeds to accelerate the production and delivery of quantum applications.

In addition, it will focus on building on more than 200 US patents granted to the company since its inception in 1999.

Notably, D-Wave's customers include top companies like Volkswagen AG, Lockheed Martin, and Accenture, among others.

D-Wave's financial advisor for the transaction is Morgan Stanley, and Citigroup is the capital markets advisor of DPCM Capital. The SPAC merger announcement comes when companies have not received the desired response to their decision to go public.

Companies like BuzzFeed and Grab Holdings took a similar route in the recent past; however, they've witnessed a sharp decline in their market valuations.

TSX declines after US inflation data, loonie down