VinFast, one of the several new entrants at the LA Auto Show, has caught investors' attention as the company presented two all-electric crossovers to the visitors. Owned by Vietnam's largest conglomerate Vingroup, the automaker is looking to expand its presence in the US.

At the LA Auto Show, VinFast showed off two cars named the VFe35 and VFe36, which are expected to show up in the US by the end of next year. Both the cars will be built at the manufacturing facility in Vietnam.

Notably, the vehicles were designed along with Pininfarina, which designed classic Ferraris and an electric sports car known as the Pininfarina Battista.

That said, as electric vehicles (EVs) are gaining momentum across the world, VinFast is getting the attention of potential investors and they are searching for its initial public offering (IPO) plans. Let's find out more about the company:

Is VinFast IPO on the cards?

VinFast aims to go public in the US stock market and the company's chief executive officer Michael Lohscheller reportedly claimed that the company could go after an IPO in the next one or two years. 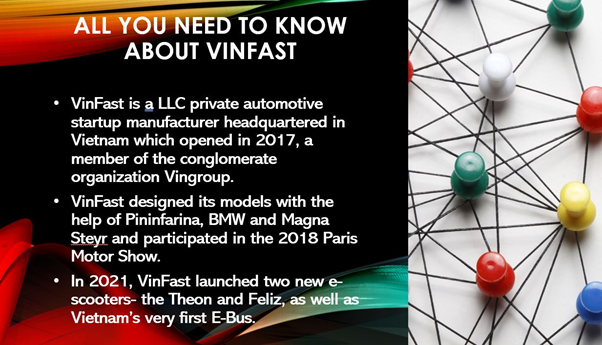 Apart from selling cars and an expected public debut in the US markets, VinFast also aims to set up its headquarters in Los Angeles and reportedly aims to invest US$ 200 million. It will likely open over 60 sales locations, numerous service centers and a few mobile service sites by 2022.

VinFast could also open a factory in the US and that will likely happen after the second half of 2024.

According to a Research and Markets report, 2020 was a tough year for the automotive industry, however, strong demand for EVs remained throughout the year.

EVs represented five per cent of new car sales in 2020 and this number is expected to climb up to seven per cent this year.