A day after former US President Donald Trump announced the plans of launching his media venture, including a social media platform named 'TRUTH Social', it has been announced that the Trump Media and Technology Group (TMTG) will go public through a merger.

Mr Trump's spokeswoman Liz Harrington announced on Twitter that the TMTG will list on the Nasdaq Stock Market after a merger with Digital World Acquisition Group. The transaction values TMTG at up to US$ 1.7 billion, depending on the performance of the stock price after a business combination.

According to reports, the special purpose acquisition company (SPAC) has filed an 8-K form with the Securities and Exchange Commission (SEC). The 8-K Form comprises merger details and is necessary for any deal to proceed.

TMTG's initial enterprise value is US$ 875 million, and it could have a potential additional earnout of US$ 825 million. Mr Trump's company is set to get US$ 293 million from the SPAC trust account, however, the final payout could vary as per how many redemptions are there in the merger vote.

It seems that the former US president is 'still angry' over Facebook and Twitter's decision of banning him on their respective social media platforms. In a statement, Mr Trump said that he has stood up against the tyranny of Big Tech by launching TRUTH Social.

On June 5, 2021, Facebook said that it had suspended Donald Trump's Facebook and Instagram accounts for two years. Earlier in January this year, the former US president was barred indefinitely over his posts on the US Capitol riots. 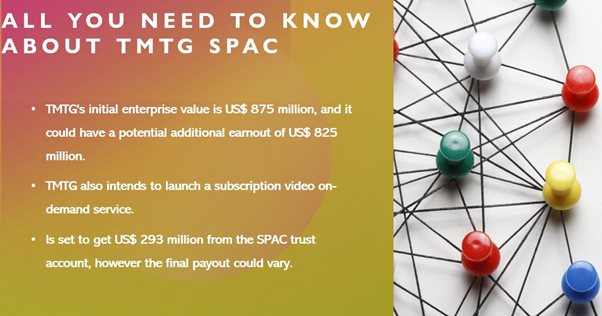 On January 9 this year, Twitter had suspended Mr Trump’s account due to the Capitol Hill violence. The micro-blogging website said that the decision was taken after a close review of his tweets.

Also Read: Can Bitcoin surpass Apple’s market cap in 2022 after it did Facebook?

Although there's still time before the beta version of the TRUTH Social app is launched, there are chances that the social media platform could get a massive userbase as Mr Trump continues to remain in the news.

Despite non-stop controversies during his tenure as the US president, Mr Trump managed to increase his vote share to 47 per cent in 2020, up from 46 per cent in 2016. He received 74.22 million votes; the highest votes ever polled for a losing candidate.