NVIDIA Corporation (NASDAQ:NVDA) has announced that SoftBank Group Corp has cancelled the acquisition deal of its subsidiary Arm Ltd.

The American chipmaker was supposed to purchase Arm from SoftBank, and the deal was valued at approximately US$ 80 billion.

In December 2020, the US Federal Trade Commission sued to block the cash-and-stock deal and alleged that if NVIDIA buys Arm, it will hurt the competition in the chip markets.

Meanwhile, the European Commission expressed concerns over the deal and said it could lead to a spike in the prices of semiconductors.

According to reports, the deal cancellation could be a setback for SoftBank's efforts to raise funds as valuations across its portfolio are under pressure at the moment.

Portfolio companies of SoftBank are reportedly trading below their initial public offering (IPO) price. Thus, there's a lot of pressure on the Japanese conglomerate.

What was the deal between NVIDIA and SoftBank?

On September 13, 2020, the US chipmaker and SoftBank agreed that NVIDIA would acquire Arm from the Japanese conglomerate. 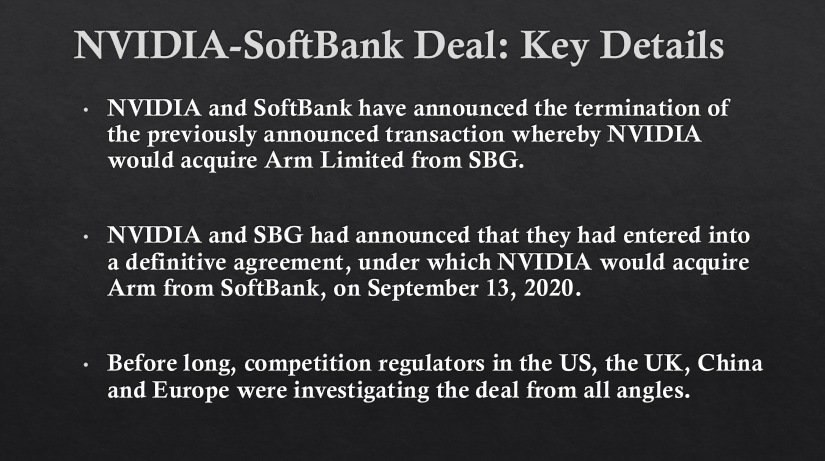 As per the agreed terms, SBG will keep US$ 1.25 billion prepaid by NVIDIA, and it will be shown as profit in the financial results of the fourth quarter. Meanwhile, NVIDIA will retain a 20-year Arm license.

Arm is a Cambridge-based semiconductor and software design company. It is worth mentioning that about 25 per cent of Arm shares are attributable to SoftBank Vision Fund 1.

Arm is expected to start its IPO preparations, and it is said to go public before March 2023. Reports claim that the company would trade publicly in the United States equities market and probably the Nasdaq.

In 2016, SoftBank had acquired Arm for about US$ 32 billion. Notably, Arm's technology is used to power Apple's iPhone and almost all smartphones.

Arm has appointed a new chief executive officer, and Rene Haas is expected to replace Simon Segars. Mr Haas got associated with Arm in 2013, and he has previously worked at NVIDIA, suggests published reports.