Investors are looking for stocks of Nexii Building Solutions Inc. as it has emerged as the fastest Canadian company to attain unicorn status. Private companies which are valued at over C$ 1 billion are known as 'unicorns' in the venture capital industry.

The Vancouver-based construction company attained this status after securing an investment of C$ 45 million, increasing its valuation to approximately C$ 1.6 billion.

According to reports, Nexii has become the 10th company in British Columbia to achieve a valuation of over C$ 1 billion since December 2020.

Nexii Building offers sustainable construction solutions and is also the creator of a building material called Nexiite. This construction material can be used for building walls, floors and roofs and reduce carbon emissions as it is a low-carbon alternative to cement and concrete.

All you need to know about Nexii Building Solutions

The sustainable construction company is gaining momentum in Canada as the government is focusing on fighting climate change.

Nexii has completed sustainable construction projects for prestigious organizations like the Bank of Nova Scotia, Popeyes Louisiana Kitchen and Starbucks.

Notably, Nexii is also involved in the construction of a new outer envelope for a Marriott Courtyard hotel in British Columbia. The company also has Gregor Robertson on board as a senior executive and he is the former mayor of Vancouver.

Nexii's technology claims to reduce energy demand for heating by 55 per cent and produce up to a third less carbon in comparison to the conventional construction materials.

According to reports, cement is one of the highest contributors to carbon emissions in the construction industry as it can produce about 900 kilograms of carbon dioxide per tonne.

As Nexiite eliminates the need for steel framing and wood, it can reduce the construction time by up to 75 per cent.

Robertson has said that the company is anticipating a surge in demand for Nexiite for mid-to-high-rise buildings as they require it to be more energy-efficient. As Canada is highly dedicated to combating climate change, materials with a lower carbon footprint may become mainstream in the future. 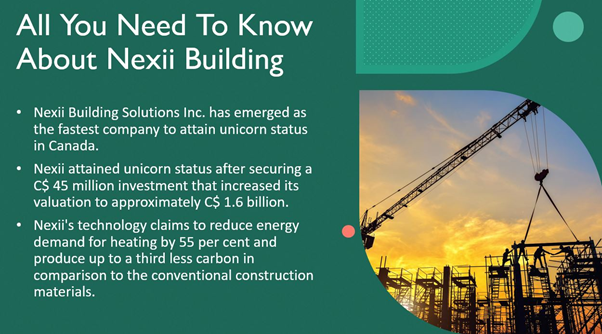 Can you buy the Nexii stock?

The Vancouver-based company is privately held and has not announced any initial public offering plans. Those who are interested in the Nexii stock will have to wait for the company to list its shares on the stock market.

If the IPO happens, retail investors could try and grab pre-IPO shares through stockbrokers or trading platforms of brokerage companies.

The sustainable construction industry is expected to witness a boom in the coming years. According to a Market Research Future report, the global green buildings market is estimated to grow at a compound annual growth rate of 14.3 per cent by 2027.