It is considered a big milestone for a company to go public, which is basically the process where a privately-owned enterprise transitions into a public one. The traditional way to go about it is by launching an initial public offering (IPO) and listing its securities on the stock market.

This is where the question comes in as to how to go about an IPO. In this article, we will discuss in detail the procedure of launching an IPO in Canada.

Experts believe that the decision to make a private company public is crucial as it calls for several requirements, structural changes, regulations and, not the least of all, significant costs. There are, however, some benefits to it as well.

What Does It Cost To Publicly List A Company?

While the benefits of going public may seem appealing, it comes with a substantial cost. It is difficult to gauge exactly how much the process could cost, but there are a few general expenses.

How Do You Launch An IPO In Canada?

About 50 per cent of Canadians invest in purchasing shares of public companies, which is one of the many reasons that compel private businesses to go public.

In Canada, a company would have to complete an application for listing and file a prospectus with the Canadian securities regulatory in order launch an IPO. Once the IPO process is initiated, it usually takes at least 12 weeks to wrap up. But the length of the time required can vary from one company to another.

Here are steps of launching an IPO in Canada: 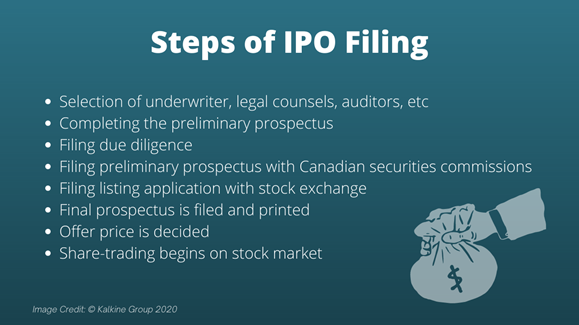 Is Going Public Worth It?

It is a very subjective scenario that varies from one company to another. Getting your company publicly listed, which can be done in ways other than an IPO, comes with its own list of both pros and cons. Ultimately, it is up to the company to weigh in on it and decide based on its needs.