Hertz re-IPO: How to buy the bankruptcy survivor’s stock?

Hertz Global Holdings Inc, the American rental car company that recovered from bankruptcy less than four months ago, is gearing up to reenter the stock trading space once again.

The Estero, Florida-based firm made major headlines recently for placing an order for 100,000 Tesla cars in a bet to electrify its fleet – a move that sent Tesla’s value zooming past the US$ 1 trillion-mark for the first time ever.

Hertz had hinted at its intentions of going public again back in August this year, after it posted robust second quarter financial results and announced its recovery from bankruptcy.

Then, earlier in October, Hertz submitted with the US Securities and Exchange Commission (SEC) the documents required for an initial public offering (IPO).

Before we take a closer glance at Hertz’ re-IPO plans, let’s rewind to its bankcruptcy crisis a little bit.

How Hertz resurrected from bankruptcy

As the COVID-19 pandemic brought travel and tourism to a grinding halt and the aviation industry to its knees last year, rental car companies were left in a lurch as well. On one hand, usage of rental automobiles dropped dramatically amid the lockdown, while on the other hand, with airlines functioning at a limited rate, rental players were left with a significant surplus of vehicles on hand.

As this pushed up their parking expenses, many of these companies also resorted to selling of their vehicles in the used car market to rake in some capital for survival.

Amid all of this, Hertz announced in late May 2020 that it will be entering Bankruptcy Chapter 11. Soon after, it was also granted the permission to sell off its stock worth about US$ 1 billion in June last year.

The car rental fleet company’s previous shareholders were significantly hit by the bankruptcy, with billionaire investor Carl Icahn reportedly losing some US$ 2 billion.

But even as the company crumbled under the weight of the pandemic, Hertz Global stocks raged by nearly 900 per cent within a couple of weeks after its bankruptcy. The meme rally even prompted Hertz to look into issuing more common shares to cash in on the frenzied surge during its tough times. But soon enough, the chaos died down and its stock deflated from the massive levels.

While still recovering from the pandemic blows, automakers were kicked further down by chip shortage earlier this year.

Eventually, however, Hertz took a turn for the better, especially amid a reported shortage in the rental car market that is said to be bolstering rates to substantial levels.

As its conditions improved, Hertz saw its topline surge by 62 per cent quarter-over-quarter (QoQ) to US$ 1.9 billion in Q2 2021. While it still noted a significant net loss of US$ 168 million in this quarter, it also announced its emergence from bankruptcy as on June 30, 2021.

The rental car player has said that the terms of its IPO are yet to be determined, although it did note that the offering is likely to take place in the fourth quarter of 2021. 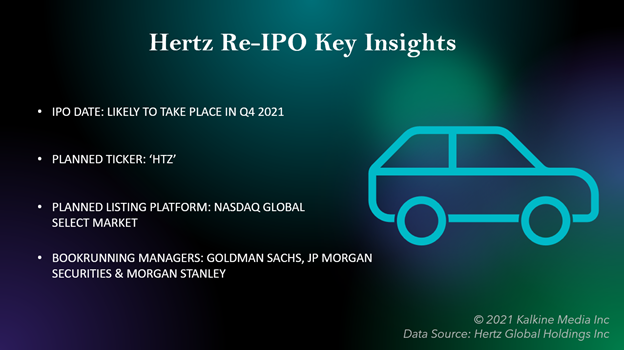 The enterprise also added that it plans to list its common stock, which are presently available on the over-the-counter market, on the Nasdaq Global Select Market under the ticker of ‘HTZ’.

Notable financial entities like Goldman Sachs, JP Morgan Securities and Morgan Stanley are set to take up charge as the lead bookrunning managers for its the IPO, Hertz said.

Since Hertz plans to see its IPO kickstart in Q4 2021, HERTZ stocks may be available for trading soon on the NASDAQ.

Investors curious about this rental car player’s re-IPO could explore the stocks following the IPO or looking into its pre-IPO options after, of course, proper research.