The stock in discussion is Codan Limited (ASX:CDA), an AU$3.20 billion technology & hardware equipment company with a global footprint. Codan has offices in Australia, Europe, Middle East, Asia and America. The Company has a diversified range of electronic products backed by over six decades of operations. It has multiple innovative technological solutions in the electronics, communication and metal detection space. In addition, it has diversified its offerings by growing inorganically via multiple successful acquisitions.

Stock up multifold in 5 years 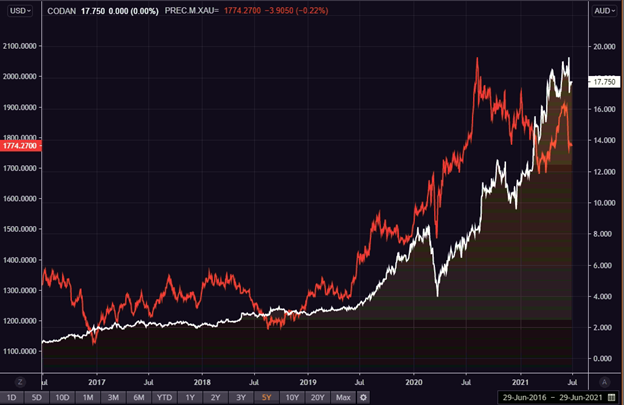 Gold and treasure hunters use Codan’s metal detectors. Detectors under the Minelab brand are known for exceptional quality and are ISO 9001 certified.

The increase in the development of the transit sector significantly drives metal detector market growth.

Codan is a key player in this sector. Its’ Metal Detection Sales grew 55% in H1-FY21. The Company is currently focusing on expanding its product portfolio & network presence.

Sector trend: The Tactical Communication Market is estimated to grow to a billion-dollar by 2030. The rapid shift towards asymmetric warfare is forcing militaries to increase investments towards network-centric warfare. The US is the largest military spender globally and is expected to generate huge demand for Leader and Manpack radios.

Codan Communications has recently produced the markets’ smallest and lightest manpack, the Sentry-H 6110-MP. In addition, it is currently innovating with software-defined radio technology to overcome the inherent limitations of HF technology. 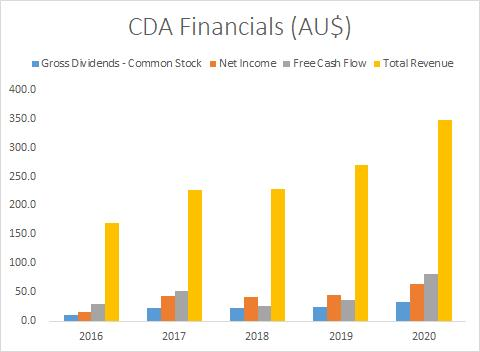 Codan has been successfully growing its revenue in the past 4 years. The revenue growth is also accompanied by growth in free cash flow, net income and dividend. The topline has increased at a CARG of 20% while the operating profit, EBIT, grew at a much healthier clip of 46%.  The Company managed to reward the shareholders with a 33% CAGR growth in divided during the same period.

Codan delivered an impressive set of numbers in H1-FY21 too. The Company reported its highest half-year profits of AU$41.3 million a 36% rise on pcp. The Group revenues were at a record high of AU$194 million, a 14% increase on PCP. Its fully diluted EPS was 22.8 cents, up 36% PCP.

CDA paid a fully franked interim dividend of 10.5 cents per share and the directors expect to pay dividends in future as well. It will help CDA align with its policy of paying shareholders 50% of the company’s full-year profits as dividends.

How is Codan poised for the Future?

Let us now look at some of the key business risks.