While investing in the stock market, an investor has primarily three options to choose from: small caps, mid-caps and large caps. An investment in large caps is often safer than the small caps, but the latter has higher growth potential. Therefore, it often becomes a personal choice between high-risk and high return or low risk and low return.

For high risk investors, small caps seem to be an ideal choice of investment. However, a judicious blend of different market cap companies is recommended for a stable portfolio.

S&P/ASX Small Ordinaries Index (ASX: XSO) is used as a benchmark for the Australian small-cap companies. The index has been designed to measure the performance of companies which are included in the S&P/ASX 300, but not in the S&P/ASX 100.

The index has delivered a healthy return of 59.5% return from the March lows, depicting the enthusiasm among buyers. Let's have a look at three small-cap stock which have performed pretty well during these challenging times.

In the recent numbers declared by the company for the half-year ended 30th June 2020, the statutory profit after tax was reported higher than three times, at $65.6 million compared to $21.3 million profit after tax as of 31st December 2019.he company’s response to the Covid-19 has also been commendable by rapidly adapting to new modes of operation to ensure the safety of everyone. The company has reported no material impact on production due to the pandemic, and it continues to manage the impact.

A recent joint venture of the company sold its first project in the Lumley Park and is currently selling the unsold units at the Carter Toorak project and the land at the Brookville project. Due to the significant impact of the pandemic on the property market, an independent committee is valuing the remaining unsold unit to reflect their recoverable values as of 30th June 2020. 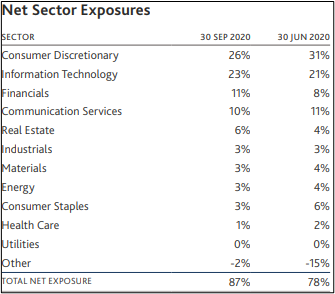 Some of the star performers were Reliance Industries (+31%), Taiwan Semiconductor Manufacturing (+38%), LG Chem (+33%) etc. As of the September quarter, the top 3 holdings of the company are Taiwan Semiconductor (7.1%), Samsung Electronics Co (6.8%) and Tencent Holdings (6.6%).

Net tangible assets backing per share was reported at $1.1964 post-tax, which was higher than the previous month reporting of $1.1782.

The company expects the current economic recovery is unlikely to continue in the future, and some developed economies have already spend a lot of firepower in the stimulus. Therefore, the exposure has been pre-emptively reduced to take it into consideration. The company finds economic prospects in Asia to be unique as major reforms are taking place.

Recently, the stock hit a 52-week high of $1.205 after recovering from the March low of $0.825. The investors are still participating in the rally, and no halt in the uptrend is visible. With a current market cap of $422.94 million, the company is delivering a decent performance in both its funds and share price with 30 October 2020 ending at $1.180.

The twelve months to 30th June 2020 was a positive year for the company, posting a 16.4% return versus its benchmark index MSCI All Country World Index (ex-Australia) return of 4.8%. The outperformance in the falling market has been a niche of the fund due to its higher quality and less cyclic business holdings.

The net profit after income tax attributable to the owners of WCM Global Growth was significantly higher than $16,985,703 in 2019 and reported at $24,605,752. The basic earnings per share (EPS) was reported at 14.2 cents per share compared to 18.0 cents per share, reported last year.

The funds top 3 holdings are Shopify (6.65%), West Pharmaceutical Services (4.64%) and MercadoLibre (4.63%). The company added a few of the companies during the pandemic into its holdings due to attractive valuations like lululemon Athletica, luxury car manufacturer Ferrari etc.

In a recent weekly net tangible asset (NTA) backing per share statement by the company released on 16th October 2020, it declared NTA before tax at $1.619. The NTA after tax stood at $1.449, considering the closing price at $1.400.

After recovering from the March low of $0.875, the stock didn’t just recover with the broader market but also hit the all-time high of $1.445 on 23rd October 2020. The current trend seems to be intact, and buyers are in no hurry to cash out their profits.

Also read: When the Going gets tough the tough gets going- Small Cap consumer stock on the cusp of a turnaround?