Listed on ASX and established in 2009, Real Energy Corporation Limited (ASX:RLE) is a gas development company, which has assets in the Cooper and Surat basins.

For some time now, the market seems to have been particularly keen towards latest updates pertaining to Real Energy’s plans to pursue opportunities in hydrogen energy, that have accelerated with the establishment of wholly owned subsidiary Pure Hydrogen Corporation Pty Limited. Besides, a ‘merger of equals’ between RLE and Strata-X Energy Limited (ASX:SXA) to form Pure Energy Corporation Limited is progressing to plan with Scheme Booklet likely to be released to shareholders this month.

While the merger to form Pure Energy progresses with more updates likely in the near term, Real Energy continues preliminary work on Project Venus and has indicated that updates may come in due course.

In this backdrop, let us discuss Project Venus along with its recent developments:

ATP 2051 Project Venus is an equal (50:50) Joint Venture (JV) between Real Energy and Strata-X Energy Limited. The project holds high quality and extremely prospective acreage covering 154km2 within the main Walloon Coal Seam Gas (CSG) Fairway. The permit is close to gas infrastructure with pipelines that have scope for more capacity. Besides, independent review of data in the past has determined the Recoverable Prospective Gas Resources of 694Pj – Best Estimate for 100%. 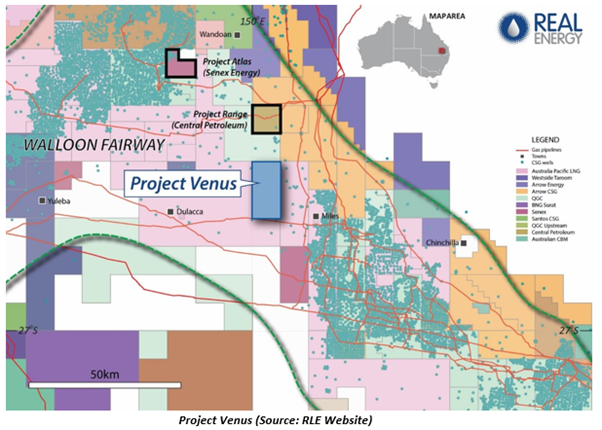 Project Venus, ~9km west of Miles, is located within the Proven Walloon CSG Fairway, a prolific CSG producing region with more than 4,000 wells drilled. MD Scott Brown regards it to be an “undoubtedly prime CSG acreage with considerable unlocked value”.

There are a number of previously drilled wells located within and around ATP2051. For instance, Connor 1 well was cased and under-reamed but never properly flow tested. Real Energy aims to re-enter, reservoir enhance, and flow test the Juandah coals in Connor-1. A low-cost re-entry flow test program has been designed to prove sufficient water flows to enable efficient dewatering and early gas flows from the fully gas saturated Juandah coal seams.

Earlier in March this year, through their equal Project Venus Joint Venture, the Company and Strata-X officially secured the permit for the project by the state government of Queensland. The JV aims to accelerate the progressive conversion of prospective gas resources to gas reserves. It has a stated goal to fast-track the development of Project Venus, thereby potentially achieving early cash flows.

Reportedly, the JV is likely to adopt a low-cost approach to prove up gas reserves.

Real Energy intends to make use of Coil Tubing for drilling out cement and mill bridge plug at Connor-1. This will be followed by abrasive perforations improvement of coal seams (Coil Tubing) in 410-645m to make ready for flow testing. For re-entry and flow testing, Wellpro was selected as contractor.

Initial plan includes 3 well CSG pilot with 2 wells ~400 m offset from Connor-1 re-entry, and the pilot is located adjacent to core hole with 100% gas saturations in upper Walloon coal seams. Real Energy advises that 3-well pilot may be formed, post results of Connor-1 re-entry, likely in Q3 to Q4 of 2020.