Flick Through Opportunities Emerging in Montney Formation for Calima Energy

Australian oil & gas company, Calima Energy Limited (ASX:CE1) has established a material position in Canada’s most active oil & gas play, Montney Formation, with over 61,700 acres of drilling and production rights. The recent elevation of 248.9 billion cubic feet of gas (Bcfg) and 12.4 million barrels (Mmbo) of light oil and natural gas liquids of Contingent Resources to the Development Pending category has further strengthened the Company’s position in the Montney Formation.

As per Calima, Montney Formation is a siltstone, owing to the following attributes:

Montney Formation presents a slew of opportunities for Calima, which holds its core asset ‘Calima Lands’ within the liquids rich gas sweet-spot of the Montney play. With that said, let us quickly discuss the key opportunities highlighted by the Company in its recently published webinar presentation below:

The prospects of gas capacity increases are high in Montney Formation over the near to mid-term, as evident from the following developments in the high-grade area:

With T-North expansion, 240mmcf/d of gas capacity has been added via the Jackfish, Wyndwood & High Pine expansion projects. Besides, T-South expansion is expected to add 190mmcf/d capacity by 2021 following an investment of $1 billion. The Spruce Ridge expansion program is also likely to add 38km of pipeline and an additional capacity of over 400mmcf/d.

Around 375km of new pipelines, compression facilities, meters stations and associated facilities are anticipated to increase basin export capacity by 1bcf/d at a cost of $2.4 billion.

The 301km of pipeline, compression and metering facilities connecting Aitken Creek into the NGTL system is likely to add 1.5bcf/d of capacity to the system at a cost of $1.4 billion.

About 500mmcf/d of capacity is expected to be added through the addition of more compression facilities by November 2021. There is no requirement of additional pipes due to the high spec nature of the existing pipe. The expenditure of the project is estimated at $2 billion. 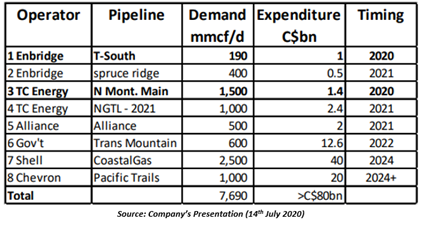 Several major West Coast LNG projects were underlined by Calima in its recent presentation, as mentioned below:

The major LNG project undergoing construction, LNG Canada, comprises downstream infrastructure with an initial capacity of up to 13 mtpa (1.7 bcf/d) with an option to expand to 26 mtpa (3.4 bcf/d). The proposed 670km Coastal Gaslink Pipeline (TransCanada) is expected to have a capacity of 2.1 bcf/d and possible expansion to 5bcf/d with up to eight compressor stations.

The upstream resource also exists in the Dawson Creek Area of the North Montney Basin, as evident from Shell/PetroChina’s assets in Groundbirch, Encana/Mitsubishi partnership for Cutback Ridge and Progress’ assets in BC Montney.

The presentation highlighted that the natural gas for the Kitimat LNG Project will be sourced from British Columbia's Western Canadian Sedimentary Basin and delivered to the processing facility by the proposed Pacific Trail Pipeline from Summit Lake, British Columbia to Kitimat.

Woodfibre project is devised to export 2.1 million tonnes of LNG per year, which is likely to have an export capacity of 14 million tonnes per year when completed.

The expansion of oil infrastructure is expected in the Montney area, with multiple players considering increases in their pipeline capacity, as discussed below:

The current capacity of Trans Mountain Pipeline is 300,000 bopd, which involves transportation of oil from Edmonton, Alberta to the Burnaby Refinery in Vancouver, British Columbia for marine export. The expansion of Trans Mountain Pipeline will entail twinning of the existing pipeline, increasing capacity to 890,000 bopd. The increased oil production is likely to require a further 600mmcf/d gas.

The Canadian government has recently purchased Kinder Morgan's Trans Mountain pipeline system for C$4.5 billion. The expansion project is projected to cost C$12.6 billion and is likely to be in service in 2020.

Enbridge’s Line 3 project currently transports oil from Hardisty, Alberta to Superior, Wisconsin. While the current capacity of the project is 400,000 bopd, replacement is expected to increase this to 760,000 bopd. The replacement cost is estimated at over C$9 billion.

The 36-inch oil pipeline project of TC Energy is proposed to transport oil to Steele City, Nebraska from Hardisty, Alberta. The pipeline capacity is projected to be 830,000 bopd, of which 500,00 bopd is already contracted. With FID received in March 2020, construction of the pipeline is likely to cost US$8 billion.