Australia-headquartered Variscan Mines Limited (ASX:VAR) has taken a great leap forward by embarking on an underground diamond drilling programme at the San Jose-Novales mine. The San Jose mine forms part of the Company’s Spain-based Novales-Udias project located in Cantabria.

To recall, Variscan received approval from the Government of Cantabria to carry out underground drilling at San Jose mine in September 2020.

Let us quickly discuss the key details of the underground drilling programme initiated at the San Jose mine:

Variscan has discovered 26 accessible drilling bays, from which 126 diamond drillholes (6,095m) have been tentatively planned. These holes comprise several redundancy holes too. From this 6,095m of proposed drilling, the Company has decided to conduct 2,000m over the coming months, initially finalising the higher priority drillholes. 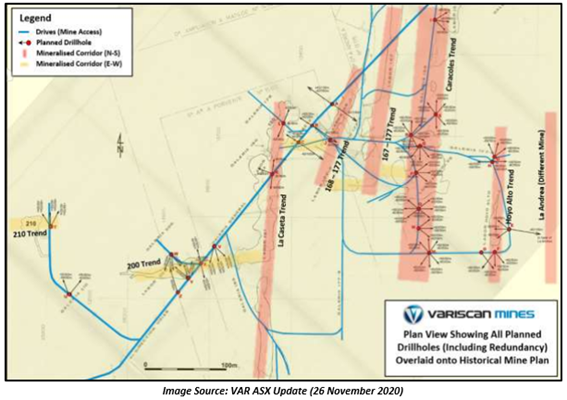 Variscan intends to complete the planned 2,000m campaign in two phases of 1,000m, either side of the Christmas period. The first phase will include 21 drillholes (925m) from 5 drilling bays that offer ready access to “La Caseta”, one of the most prospective targets.

The “La Caseta” area is deemed to be a high-priority target owing to several in-situ high-grade intersections from historical drillholes that lie outside of existing stopes. The area comprises a known fault zone with an intersection of 21.6m @22.4% Zn, as demonstrated in the below map: 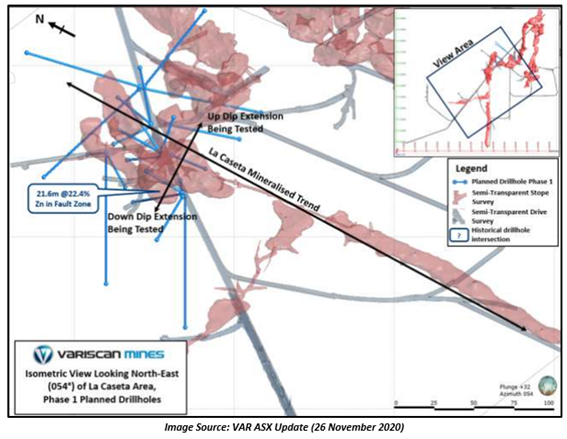 The Company has already identified further targets for follow-on drill campaigns of ~4,000m.

Initially, Variscan’s focus is to progress with its underground drilling programme at the San Jose Mine and reporting results at the earliest opportunity.

The Company has decided to kickstart the drilling programme with one diamond drilling rig, potentially increasing it to two depending on the operational constraints, to make sure that the programme is finalised as soon as possible. The Company expects to receive first assay results from the drilling campaign in January 2021.

Besides progressing with drilling campaign, Variscan also intends to conduct underground structural mapping at San Jose-Novales to better define the controls on mineralisation. 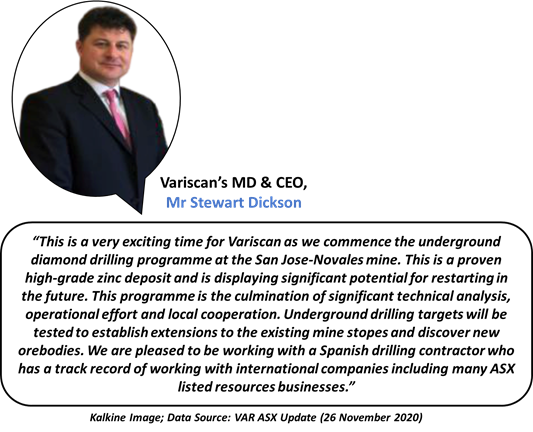