ASX-listed explorer Twenty Seven Co Limited (ASX: TSC) is acquiring two exploration licences (E77/2539 and E77/2540) near its Yarbu Gold Project in Western Australia. The Company has inked a binding term sheet with Revolution Mining Pty Ltd to acquire 100% of the new licences. It will nearly double the ground size of the Yarbu Gold Project to over 223 square kilometres. 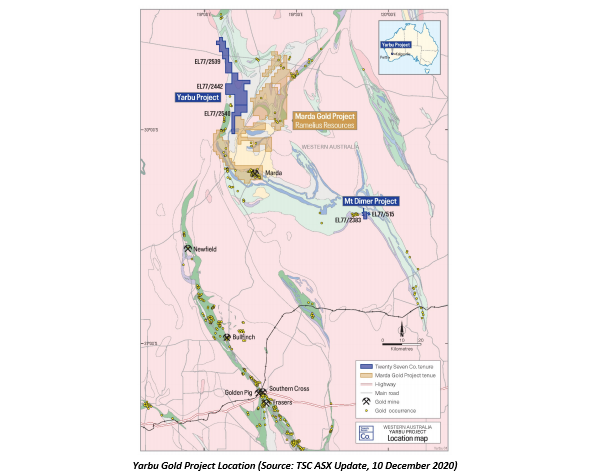 To complete the acquisition, Twenty Seven will make initial and milestone associated considerations, following the execution of a sale purchase agreement (SPA).

Milestone consideration: A payment of $250,000 will be made on the estimation of a JORC compliant inferred resource of at least 50,000 ounces of gold from the tenements, within a seven-day period. The Company will also be liable to pay $5 for every ounce above 50,000, up to a maximum of 100,000 ounces.

Both parties have agreed to use their commercial endeavours to discuss and execute the SPA within 30 days from the date of the binding term sheet.

The geology at the project is dominated by the Marda-Diemals greenstone belt, which includes an upper sequence of Diemals Formation sediments covering the BIF and mafic rocks.

The new licences significantly boost the Company’s strike length along the Clampton Fault from 5km to 22km. The Clampton Fault is interpreted to be prospective for Archean gold and several prospects related to the structure identified in the border area.

The Clampton Fault is a significant regional structure which runs through the western edge of the expanded tenure. It is associated with gold formations to the south, comprising the Clampton Mine which produced 7,800 ounces of gold from 9,534 tonnes of ore with a gold grade of 25.4g/t between 1933 and 1950.

Additionally, review of the historical exploration data outlines that the Andromeda Gold Prospect is situated within 500 metres of E77/2442, the original Yarbu Gold Project.

Gold mineralisation at Andromeda is hosted in the Diemals Formation sediments and has a historical RC intercept by Southern Cross Goldfields including 16m @ 3.09g/t Au and 21m @ 1.51g/t Au. The historical intercepts confirm the presence of high-grade gold mineralisation in the immediate area.

The Clampton Fault has been recognised as a priority target zone at the Yarbu gold project. The application of soil geochemistry to define anomalies sourced by gold mineralisation in the region offers an obvious first pass method to explore the tenement more broadly. 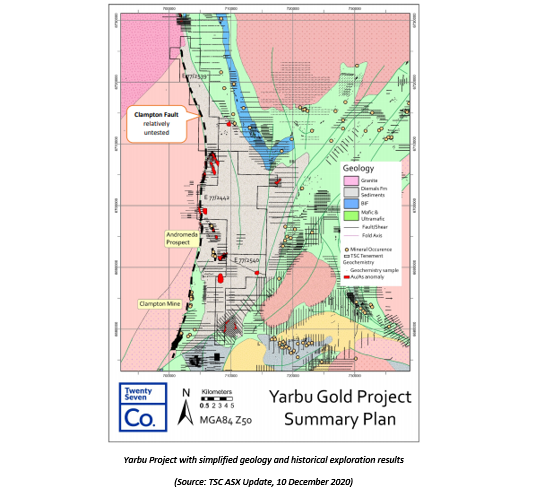 The priority tasks for TSC include-